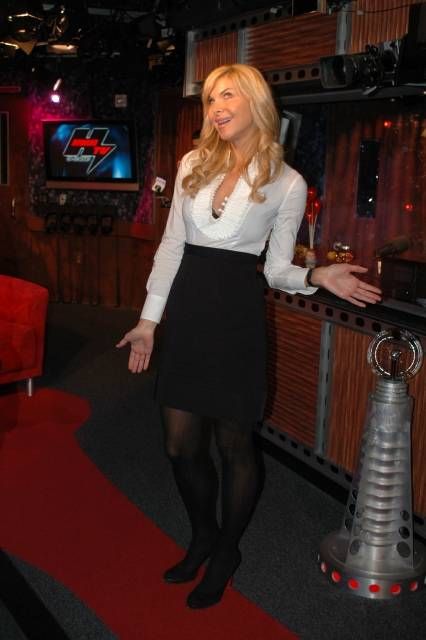 Whitney Casey stopped by to promote her new book, “The Man Plan,” and reported that she based the book’s theories on interviews with 250 men and her own real life experience. She started working as a reporter for CNN and left to work for President Clinton. Howard joked that Clinton must’ve had a ball with her, but Whitney denied it: “He never hit on me.”

After she divorced Jason, Whitney said she dated his best friend and teammate, Danny Kanell. Howard asked who Whitney’s dated since, so she listed her romantic resume: Lance Armstrong (“We never had sex.”), Rocco Dispirito (“He’s a good-looking dude…We don’t have to talk about his penis being perfect, but he knows it.”) and Adam Duritz (“I wasn’t that attracted to him.”).

Whitney told the crew that she also once dated a male model who had a penis the size of a baby’s arm, a Lebanese OB-GYN and an Indian man who claimed she was “too large.” Howard referenced some of the advice from Whitney’s book that instructs women to avoid spicy food or bold-flavored foods, so Whitney explained that the advice was meant to help women with foul-smelling vaginas.

Howard went over some the book’s other advice, like avoiding raw vegetables on dates, as they cause diarrhea. Whitney said women should also master the preparation of at least one meal, wear bras that show some nipple (but only after 9pm – and never “nude” colored ones) and never talk dirty the first time they have sex with a guy.