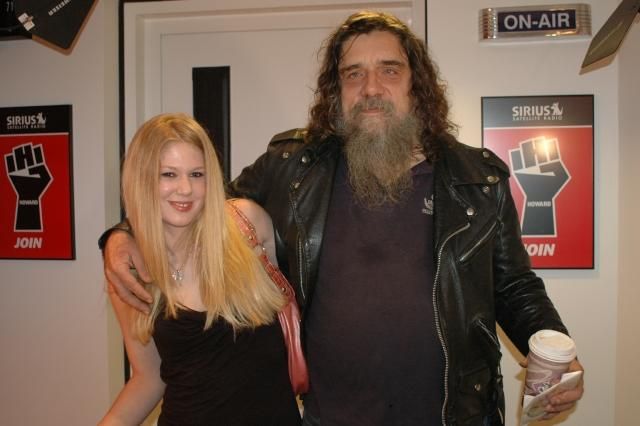 Bigfoot stopped by to promote some Halloween party he was hosting at a bar in NYC and reported that he’d both lost weight and landed himself a girlfriend: “She likes my big cock it is. It makes her cum a lot.” Bigfoot added she nearly out-sized him: “She’s about 6’4″ too. Real attractive. She’s about as skinny as a fence-pole.” Bigfoot continued bragging about his sexual prowess: “When I go into her I go down and deep it is.” Howard had his suspicions about Bigfoot’s giant girlfriend: “She’s definitely a female right?” Bigfoot claimed to have seen evidence: “I checked this one out. She definitely has a pussy.” Bigfoot then complained about being harassed by his neighbors in Vermont “because I’m so big and popular on the Howard Stern Show it is.”

Bigfoot is Not an ‘Alester’

Bigfoot told the crew he had two court courses pending – one for spitting on someone who was “trying to rip my door handle off” and another for giving a cigarette to a 14-year-old: “I sell cigarettes all the time up there it is.” Howard asked if Bigfoot thought he was competent to stand trial, and Bigfoot snapped: “I don’t think so.” While discussing the cigarette case, Bigfoot began ranting: “I’m not an ‘alester.’ I don’t ‘alest’ every girl I see it is. I just let ’em offer what they want…I’d rather jerk off…I’m about the honestest person alive it is.” He also brought one of his friends from Vermont with him and introduced the crew to Jannon, who is a 24 year old mother of two. Howard asked Jannon if she was ever worried about Bigfoot “alesting” her, but Jannon just laughed and said that he was a giant teddy bear.