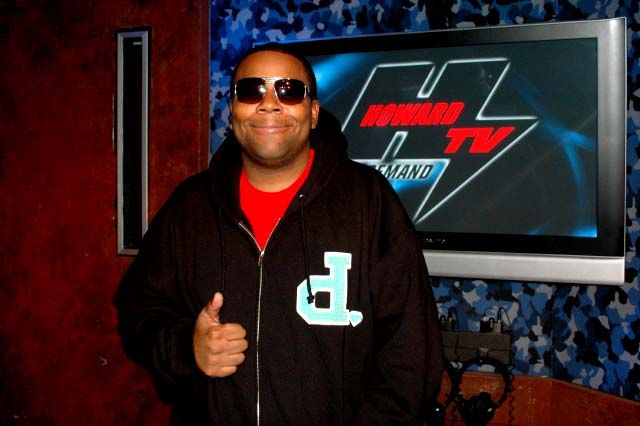 Seven-year “Saturday Night Live” veteran Kenan Thompson stopped by to say hello this morning and Howard noted he was “one funny dude.”

Howard apologized for running late with the Kardashians but Kenan said no problem as the girls seemed to be so into black guys.

Howard asked about a recent Tiger Woods’ sketch Kenan had done, and Kenan said they had gotten some heat from some activist groups about doing a sketch involving family violence when Rhianna was also on the same show – but ended up doing the bit anyway.

Kenan noted that he had lost some weight recently, or he wouldn’t have been able to do the Tiger sketch – but not enough for him to play President Obama. Howard asked Kenan what it was like for a guy who had never done stand-up to go through the “SNL” audition which featured doing a stand-up set at a comedy club in front of people like Lorne Michaels and Tina Fey. Kenan said that it was tough and he had spent a while with his manager going over a routine but ended up mostly improvising a phone call between Rev. Al Sharpton and Governor Schwarzenegger. He said he was terrified and doesn’t really know what he said, but it must have been funny enough to get him the job. Howard asked Kenan if he thought participating in the writing process helped in getting air time on “SNL.” Kenan said it absolutely did, adding that he really enjoyed coming up with premises and then working with the writers to refine them into bits.

When asked if he had gotten to work with any of the “SNL” alumni, Kenan said that Dan Aykroyd visits the set a lot and is always cool and that he got to meet Dennis Miller recently.

Robin asked if he’d gotten to meet Eddie Murphy yet, but Kenan said he hadn’t, adding he’s kind of afraid to as Eddie is one of his idols and he doesn’t want the meeting to go wrong. Howard took some calls for Kenan and the first caller wanted to know if any “SNL” guests had ever given him “wood.” Kenan would only admit that he was attracted to Megan Fox and that Taylor Swift was also very good looking.

Another caller wanted to know if the rumor was true that he had eaten his “Kenan & Kel” co-star, Kel Mitchell. Kenan just laughed and thanked the caller for boosting his self-esteem.