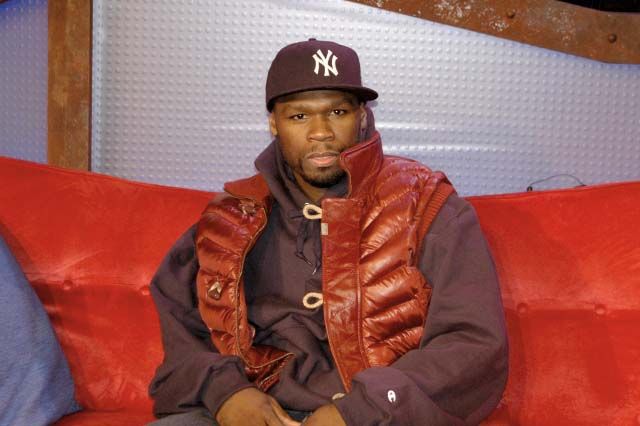 After finishing with the Roll Call, Howard asked 50 Cent if it was true that he had had his tattoos removed from his arms to make it easier to get movie roles. 50 said it was true, he had them removed because he used to have to go to the makeup trailer at 6AM to have them covered when he did movies that required them to be covered.

Howard wondered if it was true that there are 18 bedrooms in the mansion 50 bought from Michael Tyson and 50 confirmed it. Robin wanted to know if had made love in each of them and 50 shot right back that he was saving one just for her. Howard had also heard that 50 sometimes carries as much as $25,000 in cash on him, and he said it was true, but when Howard asked him to empty his pockets, 50 said it was too early in the morning for him to be carrying cash.

When Howard asked if he was ever afraid to carry that much cash around, 50 just laughed and claimed $25,000 was nothing when you consider that he sometimes wears a $300,000 watch.

50 explained that he thinks about some pain memories of his childhood. Howard wondered if was talking about his father, but 50 revealed that he never knew his father and was referring to the time he moved into his grandparents house after his mother died when he was 8 years old. When Howard told 50 about how his own grandmother died when his mother was 9, 50 started crying – which amazed Howard.

Howard read that 50 Cent had almost invested in a company that was developing a condom that helped guys last longer and 50 said it was true, but he didn’t end up investing because they were unable to make one. While on the subject, Howard asked if 50 used Magnum Condoms and he said he did, so Howard asked how long his penis was. 50 claimed he has never measured himself, but did say he loved how big it was and added: “I have a curve Robin.”