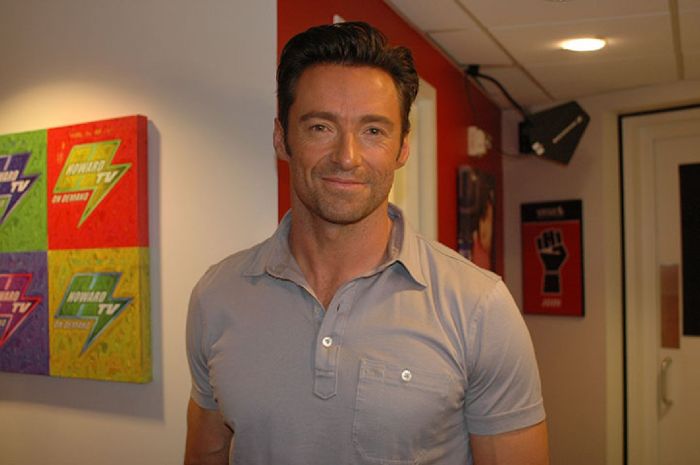 Hugh Jackman stopped by to promote “X-Men Origins: Wolverine,” and told the crew he landed the role after Dougray Scott, the actor originally cast as Wolverine, was delayed on the set of “Mission Impossible 2.” Hugh said the only remaining obstacle was his height, as Wolverine – in the comic – was 5’3″.

Howard asked Hugh how he managed to bulk up so much for the role, so Hugh confessed that he had to eat huge meals every three hours and hit the gym a lot: “I do an hour and a half in the morning when I was really trying to bulk up and then another half hour in the afternoon…I was eating 5000 calories a day.” Hugh said he would bench as much as 300lbs – but only for three or four reps at a time.

Is This a Maternal Thing?

Howard asked Hugh about his childhood, and Hugh was very forthcoming, noting that his mother left his home when he was 12: “I felt a bit weird. I felt like a leper…[usually] parents broke up but mums never left.” Hugh added that he didn’t lose his virginity until he was 18, as his father had put the fear of god into him: “My dad was a full-on Christian…full-on into it…that was one thing you can’t do.” Later, when Hugh became engaged to an older woman (now his wife), his father asked him: “Be honest, is this is a maternal thing?”

Hugh told the crew a story about the three days it took to film Halle Berry’s nude scene on the set of Swordfish: “I was there for her. I’m an off-camera guy.” Later, during a scene in which Halle wore only underwear, John Travolta entered on cue – but instead of saying his line, took in the view and exclaimed: “Holy shit! Look at the body on that girl!”

Hugh laughed about an odd scene he encountered at one of Oprah’s recent dinner parties – after a brief exchange with his host, Oprah turned to the rest of the diners and shouted: “Everybody stop! We’re having the most interesting conversation at the table! Hugh, tell everyone what we’re talking about.”

The Iron Sheik Stops By to Promote His Recent Roast DVD