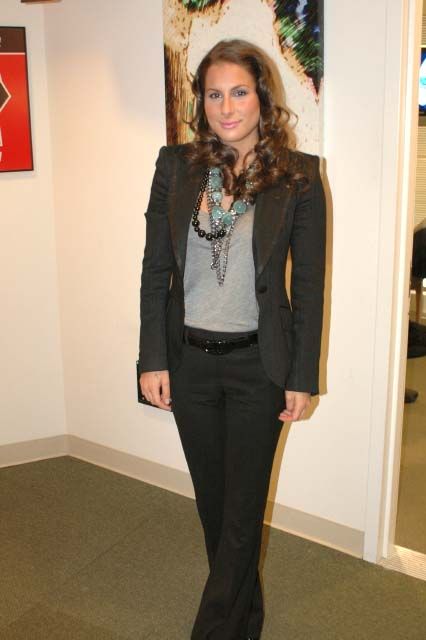 Ashley Dupre stopped by to promote her advice column in the NY Post and discuss some of the ins and outs of her career as a high-price escort. Howard first told her to start dressing sexier: “You can wear whatever you want. You’re calling the shots…dress the way you feel. You’re a sexy girl. You’re young and you’re sexy.”

Ashley said she wasn’t dressed too conservatively: “I can’t be all skin!”

Howard started with Ashley’s childhood, and she reported: “I was an honor roll student…[my parents] were so strict with me, I kind of rebelled a little bit.”

Ashley said she lost her virginity at 15, and later, when she was of age, lost herself in Manhattan: “I think I was in a situation where I was working probably about 3 jobs…I was a young girl. I was promiscuous. You’re young and you go out and you’re drinking. It’s a scene in New York.”

Howard asked Ashley if Jason Itzler, the man who introduced Ashley to the world of prostitution, was accurate in claiming that she had the most beautiful vagina on earth.

Ashley just laughed and wondered how he could know since he had never seen her vagina.

On the Governor’s Socks

Ashley refused to talk about her prostitution career with specific figures, so Howard tried a different tack, asking about the rumor that NY Governor Eliot Spitzer would like to wear socks while banging her.

Ashley said she couldn’t figure out where the rumor came from, as she’s never told anyone about it: “Where did this whole socks saga come from?”

Howard continued to press her, but she refused to confirm it: “I don’t know if it’s true or not true.”

Brangelina to the Rescue

Asked what she did if she was met by a new client that was unpleasant or unattractive, Ashley told the crew she didn’t necessarily have to stay: “You can leave. You don’t have to stay there…I’ve left. You don’t stay.”

When she wasn’t attracted to her clients, she fantasized: “Angelina Jolie and Brad Pitt…I guess you just think about, I don’t know, paying your bills and not having the stress.”

Ashley’s clients were undemanding: “I never had to dress-up or any crazy thing.”

But she would kiss them: “There’s different stages, I guess.”

Robin asked if she’d had regular clients, and Ashley said she did (“If people like you then they like you.”) but couldn’t recall her first: “I block out a lot of things in my life.”

Howard wondered if he could bang her as many times he wanted if he paid $4300 for 4 hours – as Spitzer had: “So it’s almost like an all-you-can-eat buffet?”

Ashley laughed: “I don’t think there are any rules.”

Howard wondered if Ashley had ever been raped or molested, and Ashley confessed that she had: “I got in a situation where I was raped…I was on drugs and I put myself in a situation so I’m responsible for that.”

Ashley said she was only 17 at the time and on both cocaine and ecstasy: “I just remember crying because I was so high.”

Will She Pose Nude?

Ashley said she’d turned down a reported $2 million offer to pose nude from Hustler because: “I didn’t want to further objectify myself…I’m not doing spread-eagle. I’m not sticking anything in there.”

Howard noted that she’d done ‘Girls Gone Wild’ before, but Ashley dismissed the footage, saying she was 17 at the time: “I had a fake ID…and what pisses me off is [Joe Francis] knew I was underage.”

Putting Her Life Back Together

Ashley told the crew she’d had a hard time with her family since the scandal broke, particularly her stepfather: “He’s starting to [come around] now, but it’s a strange relationship that we have.”

Howard speculated that a lot of guys might try to bang her now just so they could say they’d banged ‘Spitzer’s Whore’ and Ashley nodded: “Absolutely. I have to be so careful…I need to rebrand myself and let people see who I am rather than what they think I am.”