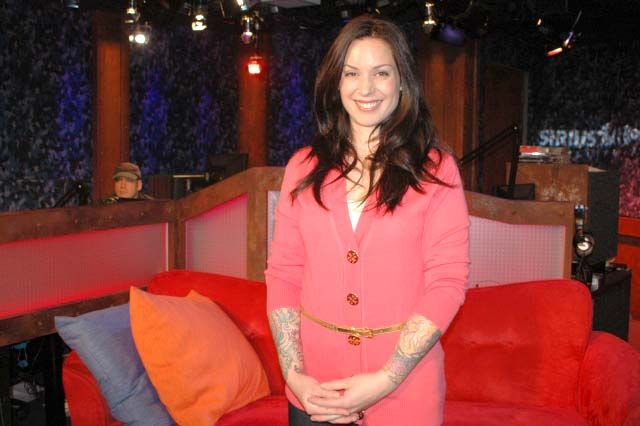 Jillian Lauren stopped by to promote her book, ‘Some Girls: My Life in a Harem,’ and told the crew she got started in the sex industry after dropping out of college at the age of 17: “I was stripping and doing escort work.”

Jillian said she did some acting work when she wasn’t stripping and met “an interesting, charismatic woman” on the set of a low-budget vampire movie.

The woman invited Jillian to work with her at an escort agency: “I thought it was going to be like ‘The Mayflower Madam.’ Candace Bergen territory.”

Jillian said her first customer was easy, so she stuck with it: “He wanted to look at himself in the mirror and do rush–like amyl nitrates? Poppers? And jerk [himself] off.”

Jillian said she enjoyed being an escort: “It felt very powerful to me…to be able to be unaffected…I didn’t feel gross. Like I said, I didn’t feel much.”

After a while, she was approached with yet another opportunity: “I was recruited. I was told–I was tipped off about this audition.”

The ‘audition’ seemed strange: “It’s really just an interview in a hotel room.”

Afterward, she was called and asked to be a ‘personal party guest’ of the Prince of Brunei.

Jillian said her life as the Prince of Brunei’s ‘personal party guest’ started simply enough: “I really was a guest at these parties [in Brunei]…it was weeks before the Prince took a shine to me.”

When she finally banged ‘Prince Jeffrey,’ she was actually kind of into it: “He owned a country. I was fascinated–captivated by him.”

Howard asked if Jillian enjoyed it, so she explained that he was with several women a day: “It was quick.”

Jillian said she was one of 40 or so women in Prince Jeffrey’s harem: “A lot of the women there were teenagers from Thailand.”

Jillian was the Prince’s #2 girl–his #1 was Filipino soap opera actress: “The Western girls were in a separate compound from the girls from Southeast Asia.”

After a year and a half, Jillian left the harem with a wad of cash: “I had a couple hundred thousand dollars.”

Jillian then revealed that her husband, Weezer bass player, Scott Shriner, was in the green room: “This is the true Prince in the equation.”