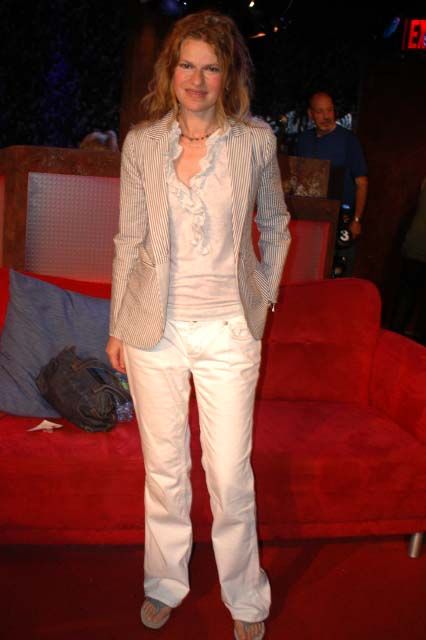 Sandra Bernhard stopped by to promote some upcoming comedy gigs and commented on Miss Howard Stern’s new vagina: “Everybody’s into tightening up their pussies and stuff now.”

Sandra said Howard was wrong to just have a simple nose job, as a pronounced nose would play an important part in the bedroom: “It’s energy. It’s sensuality.”

Howard asked if Sandra would let her daughter have a similar procedure, and Sandra said she would–if the girl waited until her mid-20s.

Howard said he was always surprised by Sandra’s taste, citing her love of Mariah Carey as an example, so Sandra shrugged: “I love Mariah because she’s insane.”

Sandra then addressed some things Lisa Lampanelli has said about her (mainly that she thinks Sandra hates her) on the show: “I don’t totally relate to her humor. But do I hate her? Lisa Lampanelli?! I don’t think about her…it makes me really uncomfortable. I’m offering, you know, an olive branch to Lisa Lampanelli here. You know, she’s funny and talented and…”

On Praying With Howard

Howard thanked Sandra for accompanying him to temple over the weekend–Sandra said she was honored: “We had such a wonderful bond over that experience.”

Sandra hoped that Howard could find the same peace at temple that she has: “It clears my mind.”