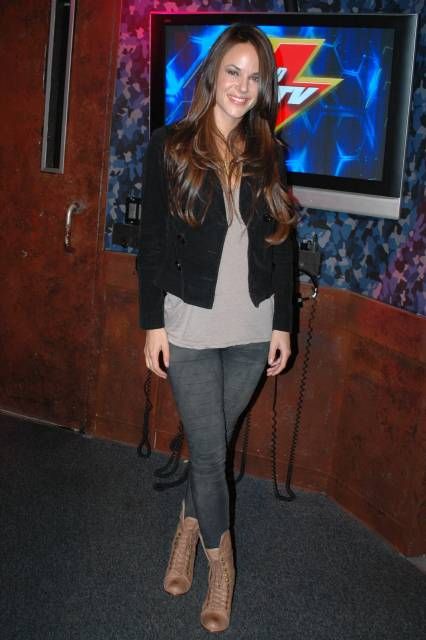 Sarah Butler stopped by to promote her starring role in the ‘I Spit On Your Grave’ remake and told Howard she got her start playing Belle from ‘Beauty & the Beast’ at Disneyland: “A lot of the Beasts were kind of hot there. Under all the costumes.”

Sarah said the dads were a job hazard (“Sometimes they can get a little raunchy with you.”) but the Beasts were worth it: “I had some crushes. There was a Beast. It’s just the connection was so strong between us because of our characters.”

Howard said he’d loved Sarah’s ‘I Spit On Your Grave’ performance: “I like that you killed the retarded guy. No remorse!”

Sarah agreed, but noted her character’s passive role in the act: “It was an indirect kill.”

Sarah said the movie’s gruesome revenge murders and brutal rape scene couldn’t keep her proud parents away from the premiere:

“They both came to the premiere. And my little sister. …my mom and my sister left in the middle of it. They left for the raping. But my Dad stayed…he kept on giving me the thumbs up, for every kill.”

On the Hook for a Second Interview

Howard wondered if it was awkward on set after Sarah’s co-stars filmed the rape scene, but Sarah denied it: “They’re all really nice guys. We’re like one big family.”

None of them even got a boner: “I was disappointed.”

Howard then hoped this early interview would motivate Sarah to return to the show when she’s a big star–unlike others–and Sarah promised she would: “It’s probably some publicist getting involved somewhere. But this is about me and you guys…I pledge to you that I will give you that second interview.”