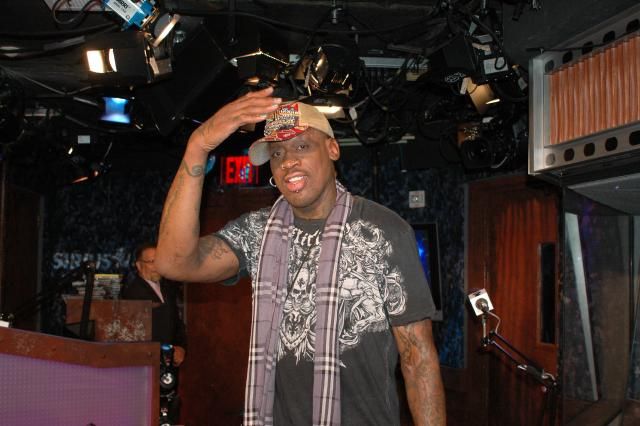 Dennis Rodman stopped by to promote the upcoming season of “Celebrity Rehab,” telling Howard that the show hadn’t slowed him down: “I just got back from St. Tropez, Ibiza, LA … this DJ thing is more fun than anything in the world. It’s what I’ve been doing for the past 15 years. Just having a good time, being active, just living life, brother.”

Dennis said he felt more engaged than he had in the NBA: “I was bored then. I was bored in 1993, brother.” Dennis did show some signs of age, asking Howard: “Have you noticed how life is moving so fast?”

Even his children outpace him: “I can’t tell my 8-year-old shit.”

Howard asked Dennis about his relationship with Carmen Electra, so Dennis shrugged: “She wanted to be in the limelight.”

But as he talked about it more, Dennis’ position softened more (“I think Carmen and I had a great relationship but it was at the wrong time.”) and more: “We’re on good terms. There’s no hatred.”

Howard told Dennis that he didn’t like the surprise-guest therapy sessions on “Celebrity Rehab” as they seemed irresponsible: “In rehab they wouldn’t do that. They wouldn’t surprise you with somebody.”

Dennis laughed in agreement: “You should’ve had Dr. Drew on the show [today] and I should’ve walked in.” Howard later said he’d heard that Dennis had immediately gone out for a drink after the show was done filming–and Dennis confirmed it: “Yeah. I ain’t gonna lie to you.” He’s taken other risks as well: “Me and Heidi [Fleiss], we stayed in contact.”

The Worm on the Hall of Fame

Howard asked if Dennis thought he belonged in the NBA’s Hall of Fame, but Dennis said it didn’t matter to him (“That won’t make or break me.”) as much as it would to his kids: “If I do get in, it’ll be all about my kids.”

Finally they can answer all the schoolyard taunts about their ‘gay’ dad with the ultimate retort: “Guess what, motherf’er, my dad’s in the Hall of Fame.”