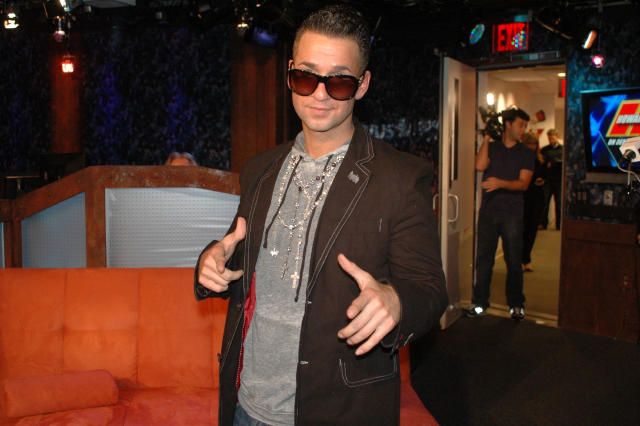 “Jersey Shore” star Mike “The Situation“ Sorrentino stopped by to promote his new book, “Here’s the Situation,“ and immediately complained that Stern Show executive producer Gary Dell’Abate had messed up his hair while putting on his headphones “Gary had no regard … he didn’t even care,“ he complained to Howard and co-host Robin Quivers. “There is a correct way to put on the headphones and he mushed me pretty much.“

Destined to be The Situation

Howard asked about Mike’s pre-MTV life, so he explained that he’d started working out at 16 “for chicks“ and was employed as a mortgage broker before the market crashed and he was forced to move in with his parents. “No money. Down on my luck. Unemployment. The whole nine,“ he recalled of that period.

Turning to modeling to make ends meet, Mike was discovered soon after. “I did underwear modeling for two weeks and got noticed for TV,“ he revealed before noting he was comforted by a sense of destiny. “There was a voice in my head that said something was out there.“

While he was in studio, Mike repeatedly worked in plugs for his vodka company, Devotion, which sells “the first protein-infused vodka on the planet.” When Robin didn’t understand the point of infusing protein into vodka, The Situation’s answer was simple. “Why wouldn’t you?“ he asked with a laugh.

It’s Hard Out There for a Pimp

Mike told the crew his newfound fame was making it hard to find a nice girl. “You’re target almost sometimes ’cause, you know, you’re doing very well for yourself … it’s getting hard for me to find a real relationship,“ he complained before noting many women are only after him for his notoriety. “A good indicator is when she starts to brag about all the other famous people she’s met.“