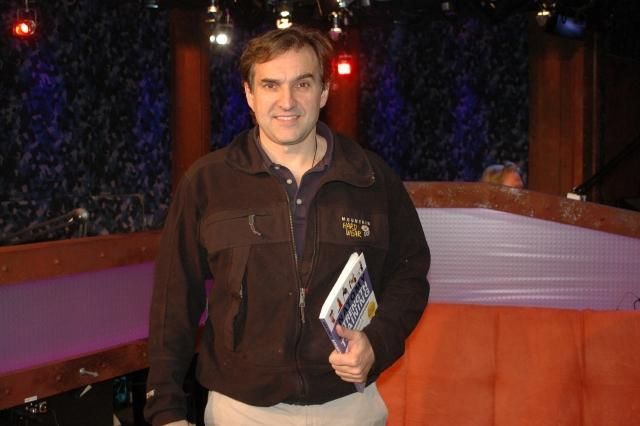 Howard’s trainer and friend, Pat Manocchia, stopped by to promote his new book, ‘Anatomy of Strength Training,’ and briefly went over his program’s philosophy: “Your body only does 5 things. 5. That’s it. There’s only 5 movements your body makes. You bend a joint, you extend a joint, you pull it away from your body, you pull it in or you rotate it.”

Howard confirmed that Pat’s program worked: “Pat is teaching me to be more of a man.”

Howard asked how Pat was able to date so many celebrities, and Pat was honest: “Frankly? Because I didn’t give a shit that they were celebrities.”

Pat revealed that he’d dated both Julia Roberts and Mary Louise Parker, which was great: “For two minutes. And then you become the woman. You’re Mrs. Somebody…ultimately, it was the people, you know. That’s a tough lifestyle…having to walk outside and think that someone’s got a camera on you all the time just sucks.”

Pat said dating Julia was particularly difficult: “To me it was slavery…there’s no leverage at all in that relationship. It’s not even.”

Pat explained: “If someone has $50 million in the bank and you’ve got $5,000, it’s not an equal relationship…if she decided she wants to move to California, she’s moving to California.”

Given this, the relationship failed: “Getting the dinner reservation when you want is not that big of a deal to me.”

The Problem With ‘The Biggest Loser’

Howard wondered how Pat felt about ‘The Biggest Loser,’ and Pat fumed: “What they’re doing is out of control…it’s the highest risk thing I’ve ever seen.”

Pat couldn’t believe the strenuous exercises the trainers force the contestants to perform: “You’re going to blow their knees out…you’re not dealing with why they’re obese. All you’re doing is focusing on the number…what you’re doing is creating a dependency.”

Jackie O. Had the Look

Pat told the crew that John F. Kennedy Jr.’s was his roommate in college–and once found himself driving with John’s mom, Jackie O, to the grocery store.

Pat said Jackie could stop anyone in their tracks with just a look: “These two woman come up to her and she just looks at them. And they stop and walk away from her.”

Howard said he’d often joked about John Jr.’s intelligence until they met during a George magazine cover shoot: “He turned out to be a really–a real sweetheart.”

Pat said John Jr. probably loved it: “He was a big fan of yours.”

A Bond Built in the Gym

A caller asked what it was like to be a friend of Howard’s, so Pat replied that Howard was no different off-air: “It’s the same guy…one of the smartest, nicest guys on the planet.”

Robin laughed: “Are you saying that because of what he does? Like, you couldn’t believe that a smart guy does this?”

Pat laughed it off–later, Howard said Pat changed his life: “He taught me to run in the rain and I [will] thank him for the rest of my life for that.”