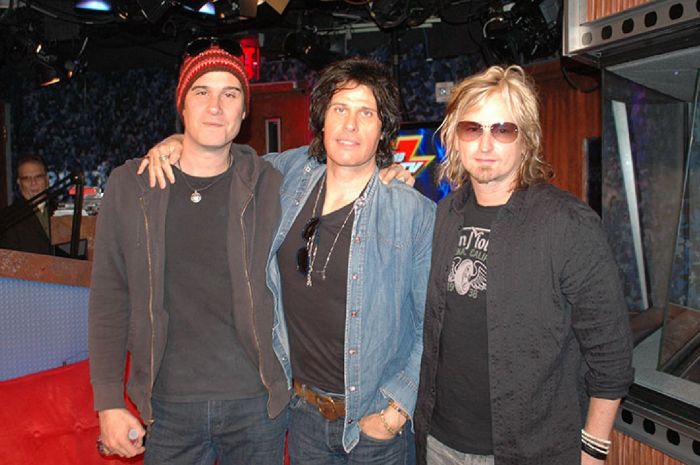 The guys from Stone Temple Pilots all stopped by to promote their new self-titled album and single ‘Between the Line,’ so Howard noted: “Last time I saw Mr. Weiland, you said–and I quote: ‘I’m never getting back together with those guys.'”

Scott remembered things differently: “What I said was you can never tell what will happen in the future.”

Whatever the story, Howard thought the band was right to reunite: “Don’t leave money on the table, boys.”

Scott told the crew that it was difficult to tour with Velvet Revolver as the band was dissolving: “Probably more so for our management.”

Howard quoted Duff McKagen as saying he’d rather reunite with Axl Rose than Scott, but Scott refused to return fire: “They’re just not–they’re not a band anymore…there were a lot of, uh, egos. In the beginning it was a really great thing.”

Scott’s Off Drugs, But Still Drinking

Howard wondered about Scott’s sobriety, so Scott said he’d learned to moderate: “I drink. I still drink some. But I don’t do any drugs.”

Howard asked the rest of the band if Scott was easier to work with now that he’s sober, and someone shouted out: “Hell no!”

Another band member said they’d even written and recorded the new album separately: “Different countries, even.”

Howard reference a rumor that Scott had gotten a massage in the delivery room while his wife was in labor, and Scott confirmed it: “At the time I was sober and I was, like, freaking out.”

Howard joked: “Did you get a happy ending?”

Jimmy laughed: “That’s the greatest thing I’ve ever heard. My ex-wife got mad at me because I was watching ‘Candid Camera’ during the delivery. She was contracting, I was laughing. If I got a massage, I’d have been stabbed through the throat! I’d be dead right now.”

How Do You Nail a Stone Temple Pilot?

Howard asked the band if they banged a lot of groupies on tour.

Scott was the first to issue a denial: “I’m not real dater…to tell you the truth, I go straight from–straight from the stage to my bus.”

Eric and Robert said they were both married with two kids apiece.

Howard thought girls must be thrilled to ‘converse’ with Dean, but Dean clarified: “Or boys.”

Howard was surprised to hear Dean was bi, laughing: “When did that happen?”

Scott joked: “That’s what broke up the band.”