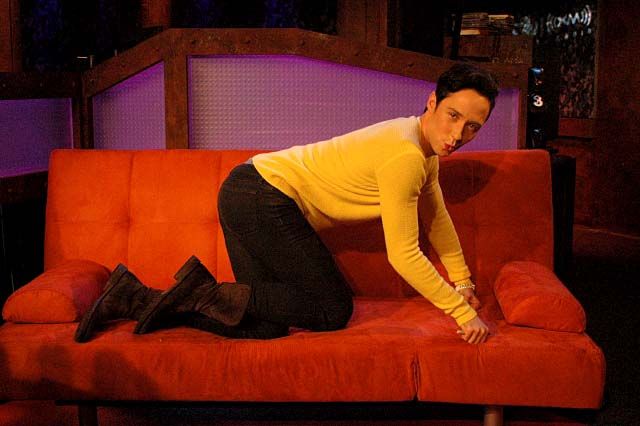 Star figure skater Johnny Weir stopped by to promote his new book, ‘Welcome to My World,’ and laughed off Howard’s comment about his dramatic make-up: “I wanted to do a natural man make-up for you.”

Howard asked why Johnny wasn’t more successful at the Vancouver Olympics, so Johnny referenced the “political” judging scandal that followed the competition: “I skated the best I ever did and that’s unfortunately [all] I’ve got to show for it. You bend over and you take it.”

Howard asked if there might be an anti-gay bias, but Johnny dodged the issue: “The people that do judge us are about a half a century older than us, so there is a cultural gap there.”

Johnny said he was glad the games were over, as he has time to rest before he starts training for 2014: “It’s nice to have this year where I can actually eat.” Johnny is 5’9″ tall and currently weighs 136lbs — a size necessary for figure skating’s aerials: “You can’t be heavy or bulky. It’s devotion.”