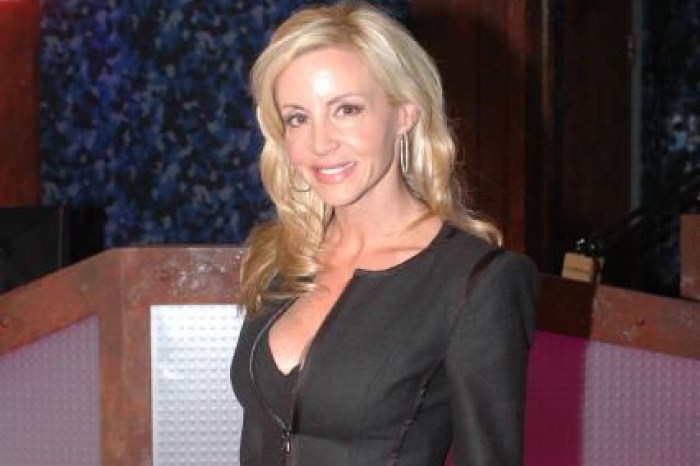 Camille Grammer stopped by to promote “The Real Housewives of Beverly Hills,” and she told the crew about the rehabilitative effort she’d put into her marriage to veteran TV actor Kelsey Grammer. “When I met him, yeah, he was a mess,” she said.

While a mess, Kelsey had game: “He’s very charming when you first meet him,” she recalled. “He swept me off my feet.”

But the charm eventually wore off. “He was boring on the weekends. I always wanted to do something and he just wanted lay around the house and watch Fox TV. Fox News, yeah,” she said.

Howard asked if Camille planned to return to “The Real Housewives of Beverly Hills” for its second season, but Camille doubted it. “We haven’t made that decision yet,” she said. “Would you stay on a show that did that to you? I mean, c’mon. They demonize me.”

Kelsey had apparently encouraged her to do the show at first, and Howard speculated he might’ve wanted her out of the way to facilitate his New York affair. “I agree. Absolutely,” Camille nodded.

Talking more about her relationship, Camille said she and Kelsey once considered spicing things up with an open relationship. “We were discussing that towards the end of our marriage … not swinging but redefining our marriage,” she said.

Howard asked if Kelsey had ever given her an orgasm, but Camille wasn’t sure. “Maybe he had. Years ago,” she said. “He would say the same if he were here. It was always, like, a struggle for us to bond that way.”

She’s also looking forward to her divorce settlement. “We didn’t even talk about a pre-nup. It wasn’t on the table,” she continued, adding, “I’ll do well.”

Still, she doesn’t want Kelsey to leave their family behind. “I want to be amicable in front of our kids—for our kids—but he’s fighting it and I don’t know why,” Camille concluded.