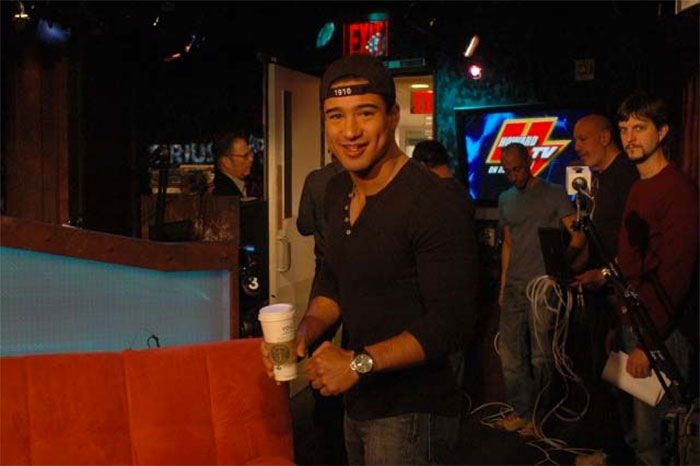 Mario Lopez stopped by the Stern Show to promote his gig as the host of “Extra,” and while in the studio he thanked Howard for the comparisons to John Stamos.

“I take that as a compliment. He hasn’t aged!” Mario said.

Howard asked how Mario got into such great shape and the actor and TV personality explained that he grew up wrestling. “It came kind of easy,” he said.”

Mario revealed he got started in show business after his parents noticed his good reading skills—and then couldn’t get him to stop talking. One of his first gigs was as a “Kids Incorporated” cast-member where, at the age of 10, he shared a first kiss with his now famous co-star, Fergie. “We were each other’s first kiss!” he told Howard.

Mario also opened up about rumors he had cheated on his fiancée Ali “Dorito Girl” Landry the night before their wedding.

“That’s not what happened actually,” Mario clarified. “[It] was at my bachelor party.”

Mario told Howard he spent his bachelor party “bouncing around” Mexico with his cousins and the group eventually ended up in Cabo. “It was Spring Break and we had a good time,” he said.

While there, Mario admitted he stepped out. “I wasn’t mature and man enough … to have ever been that serious,” he said.

Howard asked if Mario was circumcised, but Mario shook his head, saying it’s often confounded the women he’s bedded: “They’re intrigued. But when it’s erect, they’re all the same anyway.”

One of those women was Karina, his ‘Dancing with the Stars’ partner: “A couple months in[to the show]…I was definitely infatuated.”

Things didn’t work out: “She lived here. I lived in LA. She travelled a lot.”

Howard continued his review of Mario’s sexual resume, starting with his ‘Saved By the Bell’ co-star, Tiffani-Amber Theissen. Mario said Tiffani had been his girlfriend at the time and the “hottest teenage girl I’ve ever seen.”

Mario later denied banging Jamie Presley (“Where you getting this list?”) and Eva Longoria (“I’ve known her for so long, you know…she’s like my sister.”) but did confirm that he’d nailed soap actress Heidi Mueller and Miss United States Carrie Stroup: “No, I didn’t. Wait, did I? Oh yeah.”

Mario told the crew that he’d tried to help Caitlin Upton, Miss Teen South Carolina, as she infamously flubbed the Q&A portion of the Miss Teen USA 2007 pageant: “I had her arm and was kind of squeezing her arm to try to wrap it up. And she just spewed out more.”

Mario also cited Dustin “Screech” Diamond as someone who can’t stop running his mouth. “I’m not upset with him,” Mario said. “I’m just disappointed in him. What happened to that guy?”

Howard said everyone thought Mario would soon replace Regis on “Regis & Kelly,” and Mario confirmed that he had sat down with Michael Gelman, the show’s producer: “I met with him on Monday and that was that.”

Howard pressed Mario to say he’d taken–or even interviewed for–the job, but Mario refused: “I would love to say that…I didn’t say anything.”

As Mario left, Howard joked: “Do me a favor. If you get married to [your current] girl, can I come to the bachelor party?”

On Screech & the Map-Flub Queen