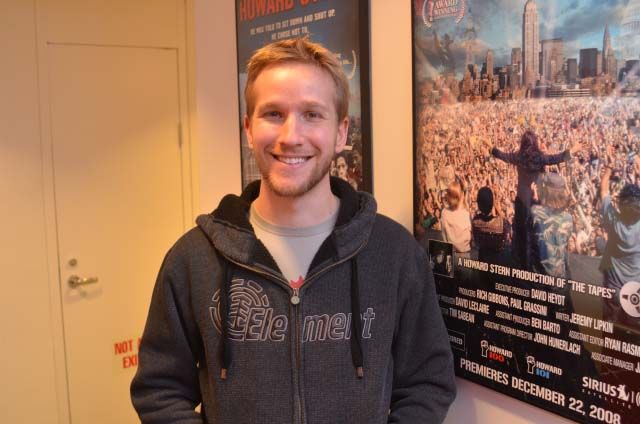 Howard said he was confused by Sussy, HowardTV’s lighting guy, who recently announced he was leaving his job to ride his bike to organic farms around the world.

Sussy came in to say his last day on the job would be April 30th: “I’m looking for a change of direction…I have no way–here–to go further up the ladder.”

Howard said it was a mistake for him to leave the workforce while in his 20s: “Slay the dragon now or forever rest in peace.”

Sussy hoped the ride would help him improve as a writer–Howard laughed: “Riding a bike is to writers as math is to English.”

Sussy insisted the change would make him happy: “It sounds like a hippie statement, but there’s other ways to measure success than money…you’re all welcome to come with me.”

Howard gave Sussy one last chance to keep his job, but Sussy would only stay on one condition: “If you double my pay.”

Robin thought Sussy’s dedication was commendable: “[He’s] a guy who believes in himself.”

Howard had one last request before Sussy left: “Now that you’re leaving, by the way, you got any good dirt on those idiots back there?”

Robin joked that he might was well leave now: “You’re worthless…[but] it’s been a pleasure working with you.” Howard agreed: “A pleasure. And you know why? I never saw you.”