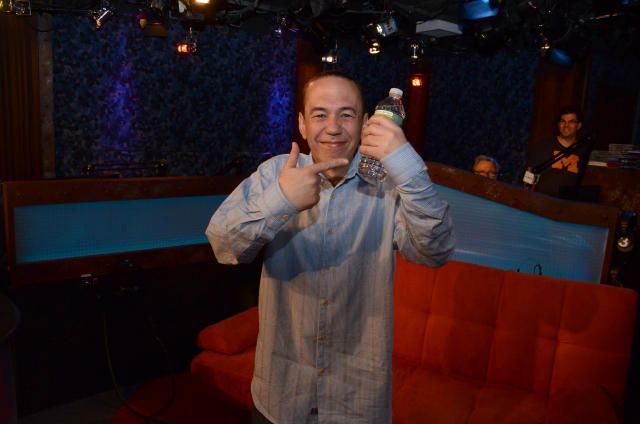 Gilbert Gottfried stopped by to promote his new book, “Rubber Balls & Liquor,” and attributed its title to a tired old gag: “That’s from a kid’s joke. Yeah, a few people said, ‘Where’d you get the title? Jackie Martling?'”

Howard was happy for his old friend: “I even defended him during that dopey Aflac duck thing…Nobody is more offensive than Gilbert, and then they’re shocked when he makes a couple of Japanese jokes during the tsunami.”

What’s in a Name?

Gilbert was hesitant to discuss Aflac by name: “I still can’t really talk about the, uh…”

Howard finished for him: “Because you got a payout? Oh, I see. So you can’t disparage the Aflac company.”

Gilbert nodded: “I’m like the head of General Motors coming on a show, going, ‘Let’s not talk about cars.’”

Gilbert said he missed the job, as it paid a ton for only day’s work every year. Gilbert said he found it difficult to regret his statements about the tsunami, because offensive jokes–to him–were as routine as eating cornflakes for breakfast: “I ate cornflakes every day for years.”

Howard questioned the sincerity of his apology and Gilbert didn’t argue: “That happened on that first day and a half where there was just, I don’t know, there was going back and forth between the agents and everything…those first two days, I was [in] a daze…that was out of the machine.”

Gilbert said his children were almost nameless to him. He referred to them as “the girl” and “the boy.” Without his wife, he joked, he’s incapable of caring for them. “They’d find them, like, starved to death somewhere,” Gilbert laughed.

Gilbert thought child-rearing was more important to his wife anyway: “I think it’s a better experience for women. Guys, you know, can enjoy it up to a point and then you want to watch TV.”

Still, he kisses his son and dedicated his book to the young pair. “I didn’t know who else to dedicate it to,” he joked.

Gilbert remembered the physical attributes of the stripper he’d bedded sometime before meeting his wife and starting a family. “It was like a cartoon,” he described of her rear end.

Howard laughed that a Gottfried sex tape would sell like gangbusters. “I’d pay anything to see that,” he said.

As Gilbert explained it, however, he hadn’t turned in a screen-worthy performance. He recalled her turning around at one point with a “horrified look.” “[It was] like she saw the Loch Ness monster or something,” he recalled. “I think she could not believe how quick [I came].”

Gilbert said he tried calling her the next day. “There was just this silence on the phone,” he said.