"I said, 'You guys shouldn't be doing this for me.' Because I don't deserve this," former player tells Howard 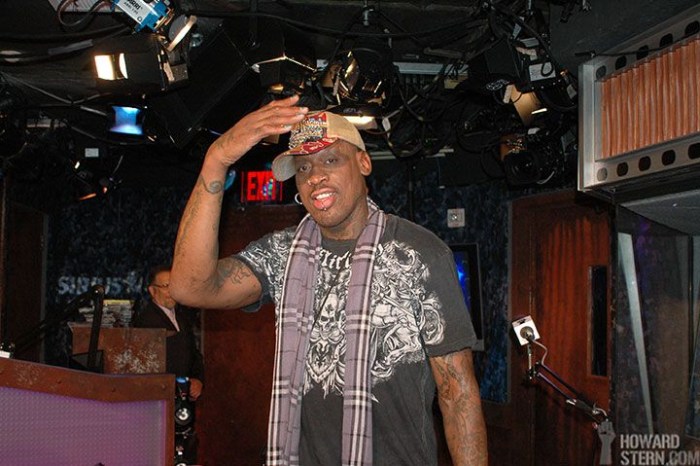 Dennis Rodman stopped by to discuss his recent induction into the NBA Hall of Fame (and to promote his appearance at the Headquarters Gentleman’s Club in NYC for his 50th birthday party), and immediately had to answer for his man-bag: “I been carrying purses, man, since 1992.”

Dennis explained he was obviously humbled by the NBA’s honor: “I was emotionally shocked … I was a piece of the team. I said, ‘You guys shouldn’t be doing this for me.’ Because I don’t deserve this.”

Howard asked what more Dennis could have done, so Dennis explained: “It wasn’t working harder. I think I should have been there a lot longer than I was … there could have been at least 10, 11, 12 years.”

Howard then played audio of Dennis breaking down after the NBA’s announcement–audio Dennis couldn’t listen to. Asked why he’d removed his headphones, Dennis said he couldn’t even look at himself on TV: “Most of the time, for me, I can’t believe it. I can’t believe I’m a star.”

In his visit to the Stern Show, basketball great Dennis Rodman confessed that, as a dedicated family man, he’d largely given up sex: “It depends on how you look at it.”

Dennis placed the blame on boredom: “I don’t do anything with women. All I do is go smoke my cigars…[and] enjoy the sun, brother.”

Still, Dennis hasn’t given up the wild lifestyle–he’s still drinking–he naively tried to kick the habit on Celebrity Rehab. Dennis said only those under the influence would trust Dr. Drew’s methods. “I don’t know how you’re going to cure anybody on TV in 19 days,” he said. “Dr. Drew is the biggest narcissist in the world.”

Before he left, Howard asked if he ever hooked up with Cindy Crawford, but Dennis denied going all the way, although they did make out, but Cindy found him too wild: “Jenny McCarthy said the same thing.”

Arnold Is A Free Man