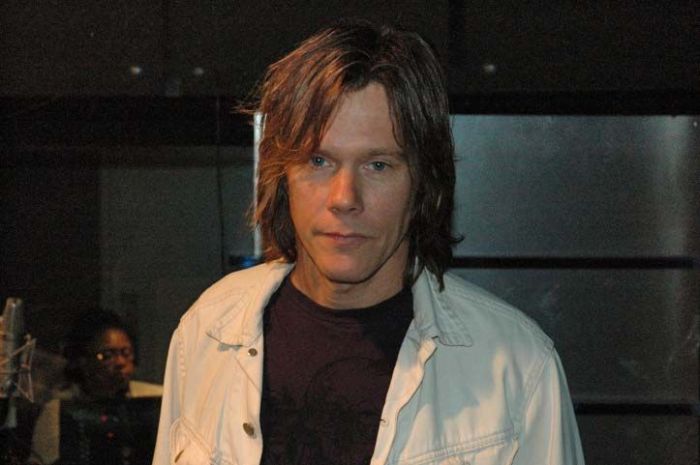 Kevin Bacon stopped by to promote his new film, “X-Men: First Class.” He told Howard he rides the subway every day and regularly helps tourists with directions: “I actually do…[but] eventually they realize it’s Kevin Bacon.”

Kevin said he was even a victim of subterranean theft while idly playing a game on his phone: “And then–bam–it’s gone. I didn’t even see the guy.”

Kevin immediately took chase, believing “like an asshole” that he’d run him down: “That’s the problem with being an actor.”

But the thief got away from him as they climbed flight after flight of stairs: “I [found] myself saying things like, ‘Stop! Thief!'”

Howard laughed that Kevin’s skill set didn’t lend itself to crimefighting: “What would you do if you caught him? Challenge him to a dance?”

While they were talking about dancing, Kevin said “Footloose” cursed him at weddings. DJs love to play the film’s theme when they spot him at the reception: “Inevitably, I’m sitting there having a good time [and] everybody looks at me, turns and [starts clapping] … like [I’m] a trained monkey,” he said.

Accordingly, Kevin has started preempting DJs with $20 in hand, bribing them not to play it. Kevin was approached recently to make a cameo in the remake, but he said the role seemed dopey. “I’m old enough that a movie I did is being remade. That is pathetic,” he joked.

Few people know that producers almost prevented him from being cast in the original. “The quote was, literally, ‘He’s not f–kable,'” Bacon recalled.

Asked about his feature film debut in “Animal House,” Kevin said the cast was divided off camera as it was on screen: “I was in the asshole fraternity. The line was drawn so heavily in the sand between the two fraternities…they didn’t want us to hang out.”

Kevin said he rarely saw John Belushi, as Belushi was usually back in New York working on “SNL” when he wasn’t needed on set. Kevin said the rest of the Delta Tau Chi crew wasn’t any more welcoming: “They would have parties in the hotel, literally down the hall. And I’d hear the party going on and I’m sitting in my room like an asshole. I mean, [I couldn’t] get invited to the party.”

But even with the big role under his belt, Kevin hadn’t really made it: “I had to ask for the night off from the restaurant I was working at to go to the premiere.”

Howard said he had a theory that Kevin and his wife, actress Kyra Sedgwick, were swingers, so Kevin laughed: “Just propose that theory to her and see how it flies.”

Asked about the money he lost to Bernie Madoff, Kevin confessed. “I lost a lot of money…you have a moment where you go, ‘Holy shit.’ That was many, many years of work that just went away,” he said.

Kevin said he Kyra lost almost all of their savings but quickly put it in perspective. “We’re okay. We’re looking at each other, we got a nice apartment, our kids are healthy. There’s other people who have it a lot worse,” he said.

Kevin credited “The Closer,” Kyra’s TNT series, for keeping them afloat. “Thank god for that show,” he said. “Without that–if it was just me trying to pull us back, it’d be tough.”