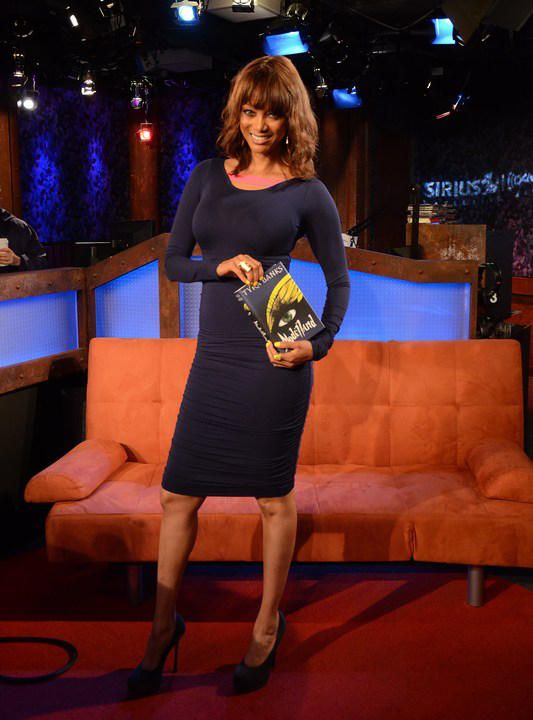 Tyra Banks stopped by to promote her new book, “Model Land,” and immediately had to answer for her “all-real” physique, saying she’d undergone X-rays on her old talk show to prove her claim: “I sure did. Because I was so tired of people saying they’re fake.”

Tyra denied that he was scared of marriage: “Maybe we both are.”

Howard asked if fellow-supermodel Naomi Campbell had ostracized Tyra early on because she was black, and Tyra nodded: “And successful maybe? Yes. Well, no, the world said that. The world told her, ‘There can only be one and here is the new one and Naomi, you better back up.’ So she reacted very strongly to something that was already negative…you know that movie Showgirls? Just do that and make it the modelling industry. My life was a living hell.”

Tyra On Virginity, Dolphins, & Net Worth

Tyra tried to avoid a few topics but eventually answered Howard’s questions about losing her virginity (“I did definitely tell my mother. After.”), dolphin phobia (“I am afraid of dolphins…I used to have dreams that I was in a swimming pool and dolphins were, like, bumping into my legs.”) and net worth: “I would never, in a million years, tell you [but] I live very frugally.”

Tyra mentioned that she was attending Harvard, so Howard jumped: “How do you get to go to Harvard for three weeks a year?”

Tyra had been admitted to a special program (“It’s like an executive business degree. I graduate next year.”) and actually stays in a dorm room when she studies, sharing space with regular students: “We share a living room and a dining room and a kitchen.”