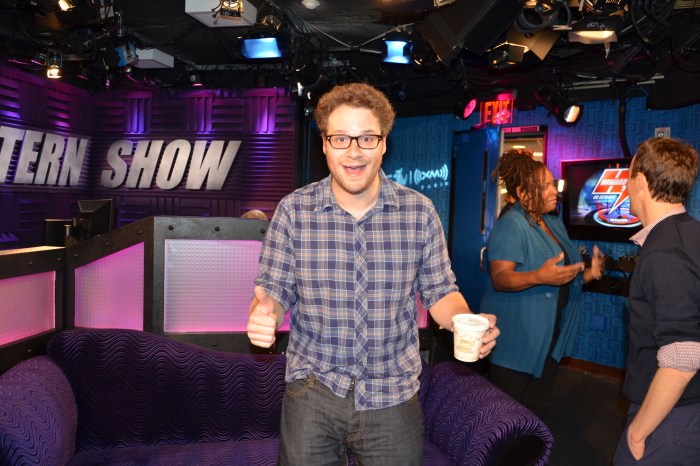 Seth Rogen stopped by to promote his latest film, “50/50” and told Howard how he got his start in show business at 22 when Sacha Baron Cohen hired him and his writing partner Evan Goldberg to write sketches on “The Ali G Show.” According to Seth, they got the gig based on their script for “Superbad.”

“The script existed so it was like our writing sample,” Seth said.

After learning only Evan had graduated from high school, Howard wondered if he was “the brains of the operation.”

“If you met him, you might say otherwise,” Seth laughed.

While at “The Ali G Show,” Seth and Evan wrote the infamous bit in which Sacha (in character as Bruno) tricked a crew of frat boy spring breakers into performing gay stunts. “I’m pretty sure he hired us just so he could use that spring break bit,” Seth told Howard.

However, Seth said the spring break bit ended much worse than the cameras let on. “Afterward, the guy[s] almost seriously kicked the shit out of him,” Seth revealed, explaining Sacha actually had to run from the frat boys while staying in character.

“He never broke,” Seth said with a laugh.

Seth said his reputation for being a stoner has only hindered his career once. “When I was promoting ‘Green Hornet,’ Sony asked me to not tell too many weed stories. And I said, ‘I don’t think I’m capable of doing that.’ It’s kind of the only thing I can talk about,” he recounted.

Seth has since figured out a loophole. “I’ll admit to smoking weed all the time, but I’ll never admit to being stoned,” he laughed.