Actor opens up about his career and love life 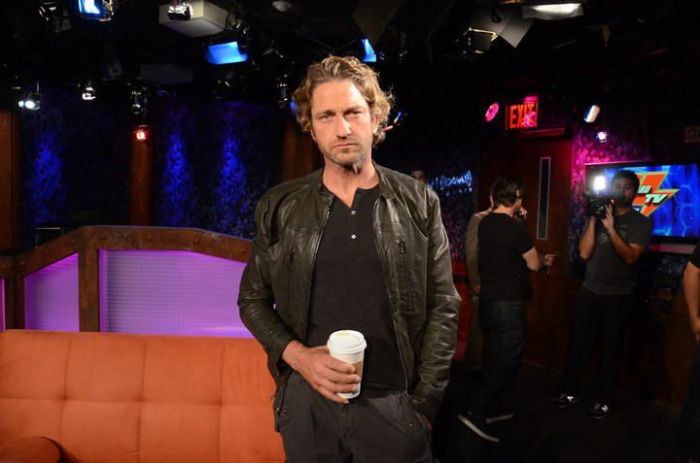 Gerard Butler stopped by to promote his new film “Machine Gun Preacher.” He told the crew he’d struggled a long time before becoming an actor–as a child, and later, a drunk law school-graduate–and was even fired from his post-grad job at a law firm. Gerard said it was less serious than it sounds, deadpanning: “I was fired because my father never loved me as a child.”

But the day he was fired, Gerard went to see a stage production of ‘Trainspotting’ and found inspiration: “I’m sitting there going, ‘This could’ve been my life.'”

Gerard then committed himself to acting, so much so that he later transformed himself for his breakout role in ‘300.’

Gerard said his ‘300’ physique took two trainers, 6-hour daily workouts, and “not steroids but creatine and glucamine…I beat the shit out of my body.”

He sustained lasting tendinosis in his biceps: “I still have issues in both shoulders to this day.”

Asked if he’d ever lived with a girl, Gerard shrugged that he was too busy to know, apologizing to an imaginary live-in paramour: “I hear you were here and I hear you’ve left but I see no evidence because my cleaner’s been here six times.”

Gerard said he had no trouble finding women (But: “It’s harder in America.”) and denied ever being in love with Jennifer Aniston: “No. Although I love her.”

Howard said he’d been seated behind Aniston at a concert and watched her shake her “million-dollar ass”, so Gerard laughed that the move was no innocent mistake: “Just that little dance, she probably knew that you’d talk about it over the years.”

Gerard said he had no desire to become half of a celebrity couple: “Their life becomes a military operation and to me, that’s not what I’m looking for.”

He added that it’s important, as a famous actor, “to live a normal life in as many ways as you can.”

That said, he continued: “We became very close. I had a great time working with her.”

Howard went down a list of Gerard’s reported dalliances, starting with Naomi Campbell–Gerard smiled: “I’ve known her for a long time and she’s got–I think she’s great. I think she’s a goddess.”