Eric is Too Old For Santa’s Lap 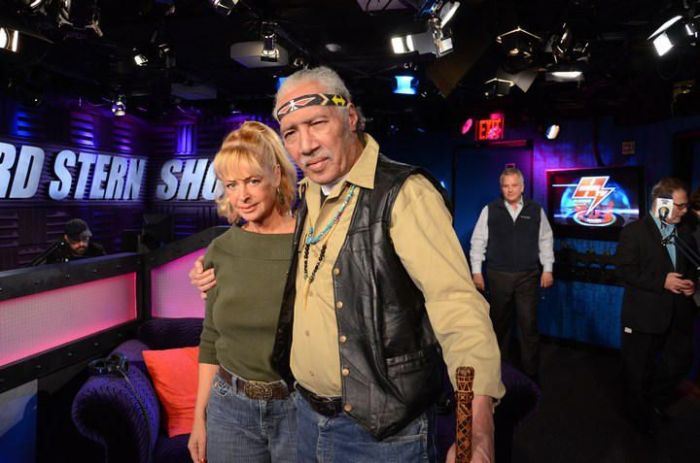 Riley Martin stopped by to promote the Kindle release of his book, “The Coming of Tan,” with his wife, Joy. Howard was clearly taken with her: “I would make beautiful love to you. Are you 100% human or are you from an alien planet?” Riley laughed it was no struggle to land such an interstellar beauty: “Miraculous things happen when you mess with the space cowboy.” Joy said she actually sought out Riley: “I pursued him.” She was attracted to their shared belief in alien life: “I did [believe]. I always did as a child.” Joy said she first heard Riley’s voice while staring into a bright light: “I was in a tanning bed in Pennsylvania. And the person before me had the show on…I heard his voice and immediately [had to meet him].” She fell hard immediately–when Riley greeted her with a hug: “It was a feeling like I’ve always known him. And it was the most powerful feeling that I’ve ever felt in my life.” Howard asked for one of said intergalactic hugs, and Riley jumped at the chance: “I’ve got to lift your wallet, you cheap bastard.”

Riley was sure his connection with Joy was genuine: “With what you are paying me, it was not for my money, Howard, you cheap bastard.” Riley said they have sex several times a week–a frequency that surprises many of the young men he meets: “One of the young men was saying, ‘You keep going up there 4 or 5 times a week, that could lead to a heart attack.’ And I said, ‘If she dies, she dies.'” Joy clarified that “up there” referred to their separate living arrangement: “The first place that we lived in had really bad energy.” Robin thought she knew why: “Riley was there!” Riley cited Joy’s pets–Joy lives with 12 domesticated birds–and Joy nodded, admitting they didn’t make for a peaceful symbol-drawing environment: “My birds and I need our own space. They scream a lot.” Asked if he was packing, Riley bristled: “Take what you have and double it.” Howard laughed: “That’s not a lot.”

Rachel Butera is a Success