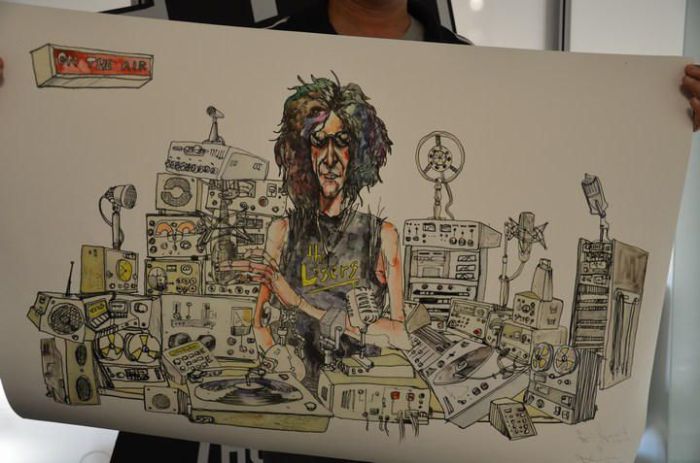 David Choe stopped by with a drawing for Howard and to discuss his recent and sudden rise to fame, noting that every news outlet in the country was after him for an interview, but he only wanted to talk with Howard: “I spent some time in prison and I learned a really crazy way to jerk off.” His method will make you wince: “Right when you’re about to come, you squeeze your choad…there’s a muscle and you can push up.” David said he was jailed in Japan as a sticky-fingered young artist: “I was in Japan, you know, graffiti-ing the walls and stealing bikes.” Stopped by a plainclothes cop for a shoplifting violation, the lack of uniform and language barrier got the better of him: “He pushed me and then I knocked him out.” In jail, his drawing skills made him a rock star–the other prisoners would fight for his services: “They’d be like, ‘This is my girlfriend. Can you draw her with her asshole open?'”

Later, when David started to get more attention as an artist, Facebook’s founding president, Sean Parker, hired him to paint some murals for the company’s offices: “He was like, ‘You want cash or you want stock?’ [And] I like to gamble, you know? I believed in Sean.” No really–he loves to gamble: “Did you guys watch the Super Bowl? You see the color of the Gatorade they dumped on the coach? That’s the shit I bet on.” David’s “0.1 to 0.25 percent of the company” is now worth an estimated $200 million, making him the highest paid artist of all time: “Maybe. It might be a hundred. Or five hundred.” And the value of his art has grown exponentially as well: a prince once paid him $500,000 to paint “a topless bat riding a motorcycle with a hippo.” His graffiti work often out-values the property itself: “I painted a building once where they demolished the whole building just to keep the wall.”

He Banged a Power Ranger

Before he left, David asked Howard to adopt him. After considering that he’d never have a son otherwise, Howard obliged, naming his new son Kim Jong Stern. An excited David then asked if this made him the “Prince of All Media” and sealed the bond by painting a tribute mural on a wall in Howard’s green room.