Is Lisa G. in Love With Benjy? 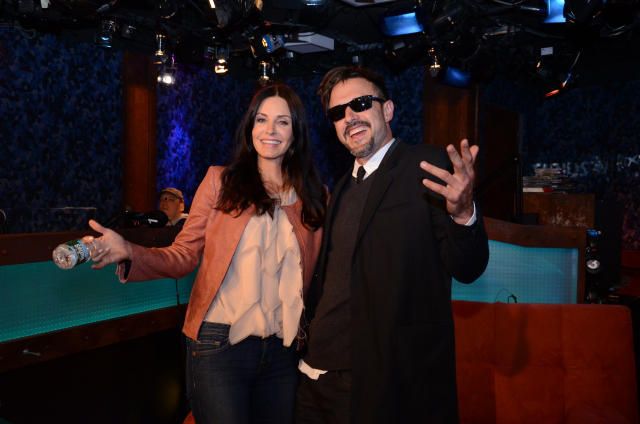 Howard repeated that he’d been distracted by Courteney’s “bullshit” presence in the audience during David Arquette’s “Dancing with the Stars” run. However, Courteney insisted it was a genuine show of support: “It was such a great family time for me and Coco to be watching her dad.” Under further pressure, Courteney denied sleeping with any of her “Cougar Town” co-stars: “I’m holding to it. I’m not lying to you. I’ve not had a man since David.” Asked to swear on Coco’s life, Courteney balked (“That’s pretty intense.”), denying that she was even capable of a sexual connection: “I’m really not ready. I’m emotionally…I’m just not ready.” Later, she amended the statement: “I’m not saying I’m not ready to have a make-out session, I’m just not ready to–I don’t know. Let me meet the guy. … I have sexual feelings, [but] there’s ways to deal with that.”

How Courtney Met the New Girl

Howard wondered if Courteney had met David’s new girlfriend, and Courteney said she had–despite her best efforts to avoid the situation. Explaining how they once crossed paths as David dropped off their daughter: “Coco was like, ‘Mommy, mommy, mommy, meet Christina.'” Christa deadpanned that Christina and Coco must get along very well: “They’re very close in age.” Courteney insisted that her personal wealth really wasn’t a factor in the divorce: “I didn’t have Jennifer Aniston’s career after ‘Friends.’ I wasn’t in 95 movies…it’s a lot less than you think.” While she and David did not have a pre-nup, they were in no rush to split everything down the middle: “We’re not selling properties.”