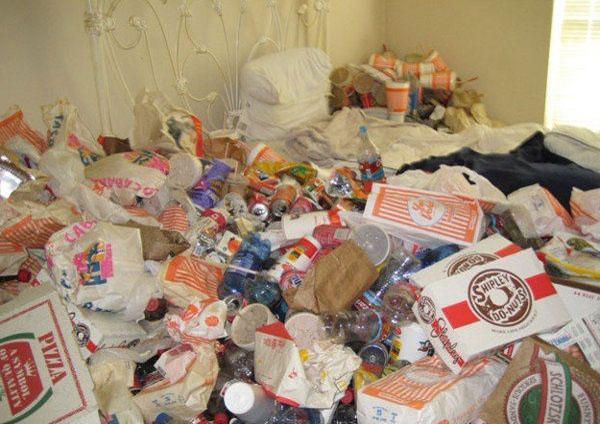 Hazardous waste removal expert Matt Paxton called in to promote the season finale of “Hoarders”: “I’m the guy who cleans up all the dead cats and poop.” How much poop? Up to 45,000 pounds in one house: “Usually it starts in the bathroom. The toilet gets full, then the bathtub gets full, then the hallway gets full, then the living room gets full…the plumbing has been gone for years by the time I get there.” Ronnie the Limo Driver said he’d dealt with Matt’s kind when cleaning out his late mother’s apartment: “You know those junk trucks that come? You hire them to come. Three trucks.” Ronnie said he also cleaned out his mom’s place when she was still alive, but she’d freaked when she got home. Matt replied that she was no exception–the cleaning process is hard on his clients: “It’s hell for them.”

“There’s Money Under That Poop”

Matt said he often finds money: he once found $13,000 in change in a woman’s Oakland apartment. It was all inside an 8-foot rat’s nest, apparently bills are the only paper rats won’t shred. Another time, he came across $45,000 in US Savings Bonds–bonds his client thought were trash: “She didn’t know what she had. We had to explain to her the difference between maturity and expiration…and this lady thought she had nothing.”

Why Ex-Cons “Get” Hoarders

Matt said he staffed his business with former addicts, like himself, and parolees, as they seem to understand the clients: “You gotta have someone who’s been knocked down–who gets the mental state. And so, for me, I prefer ex-cons or recovering addicts.” The crew makes $15,000 a job and thoroughly enjoys their work: “We’re all recovering addicts, so we need something nasty to get us off…when you hit rock bottom yourself, you kind of have to laugh to get out of it.” Matt said he’s rarely contacted by the hoarders themselves (“Usually it’s someone who loves them.”), so he handles them with kid gloves: “They don’t want to be judged. They don’t want to be made fun of. And believe it or not, that stuff protects them.” They’ve often been sick for a long time: “You can’t be a good hoarder overnight. It takes 10, 15, 20 years.”

Asked about his worst client, Matt said he’d once been called by the family of a hospitalized man and went out to clean his estate: “The deeper we got, we started finding some Polaroids, some really aggressive stuff, and it was all child pornography.” Matt turned him in and the guy, when he recovered, was was sent to jail. But when he was released, he just filled his house with junk again–and called Matt: “And we had just sent the guy to jail for 3 years! I told him to f’ off.”