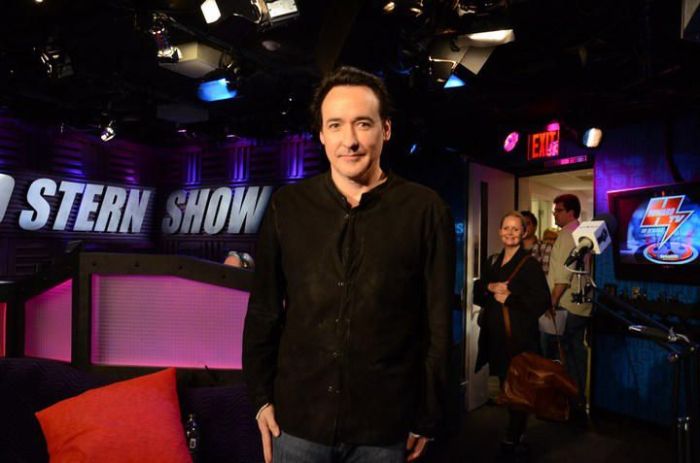 John Cusack stopped by to promote his latest film, “The Raven,” and Howard immediately confessed his love for “Say Anything,” one of John’s early classics. John wasn’t surprised, as he saw similar elements in “Private Parts”: “Your movie was kind of romantic. It was a love story.” Asked why he’d never committed to his own love story, John shrugged: “I’m sort of against divorce. I don’t want to get divorced.”

John also said he “totally” understood but didn’t condone Christian Bale’s infamous on-set tirade: “There are some of these guys, these British cinematographers, who–all they do is tweak lights. … Some of them are notoriously–talk about insane. … I mean, obviously he was a little upset. A little too upset. There’s a reason he’s playing Batman. He’s got a little anger in there. But you don’t know the context of what pissed him off.”

Howard went over John’s reported conquests, and John tried his best to keep up: Neve Campbell: “[We dated] for a while. She’s a gorgeous girl. … It was like 4 or 5 years.” Sheryl Crowe: “Not true. She’s just a friend.” Janice Dickinson: “No! That’s totally insane.” Meg Ryan: “Just a friend.” Uma Thurman: “I dated Uma. Yeah. For a second.” John also denied dating Rebecca Romijn, Minnie Driver, Britney Spears, Kate Beckinsale, Jennifer Love Hewitt and Gina Gershon–but admitted, on his way out, that he’d seen a few of them. He just wouldn’t–or couldn’t–say which ones.