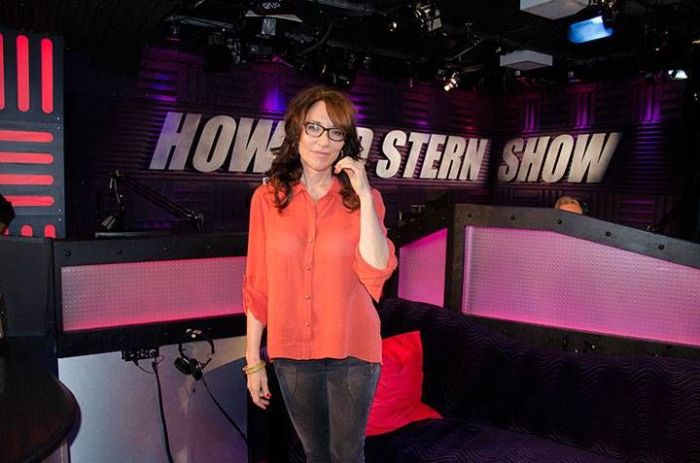 Katey Sagal stopped by to promote the new season of ‘Sons of Anarchy,’ saying she hardly shared a pedigree with its hard-boiled storylines: “I did get arrested. But it was for parking tickets.” Katey said she did have a dark past, citing a drug problem she picked up as a singer-songwriter in the 70s: “I was on the road for 10 years, and people just sort of give you stuff. That’s the lifestyle.” She eventually kicked it with AA: “I realized I wasn’t able to manage that myself.”

Asked about the time she sang in Bob Dylan’s band, Katey said it wasn’t a long gig: “It was kind of a blur. I worked with him for 2 months. I rehearsed with him for a tour…until he fired me.” Howard wondered if it was because she didn’t put out, Katey laughed: “I didn’t say that! He fired half the band a week before the tour. … We would rehearse and then we’d sit in a room and he’d play the tape back. If you made a mistake, he wouldn’t really say anything. He would just look at you. And you’d just be like this big. That was a little intimidating.”

On ‘Married With Children’

Katey said she went on to act, co-starring in ‘Married with Children’ as it languished on Fox–until a woman organized protests: “Our response was like, ‘Just change the channel.'” Howard sympathized (“I know something about that.”) as Katey praised the woman for all the complaints that just made normal people want to see the show: “She boosted our ratings. We ended up sending her flowers every year with a thank you card.”

On the Death of John Ritter

Before she left, Howard asked Katey to remember the final hours of her ‘8 Simple Rules’ co-star, John Ritter. Katey resisted, saying she didn’t want to cry: “We shot a promo and he didn’t feel well, and so, at 4 in the afternoon, he went to his room. So we all went home. We were done for the day.” But that night the cast was summoned to the hospital: “And within a couple of hours, he had passed.”