THE RETURN OF MARTY THE... 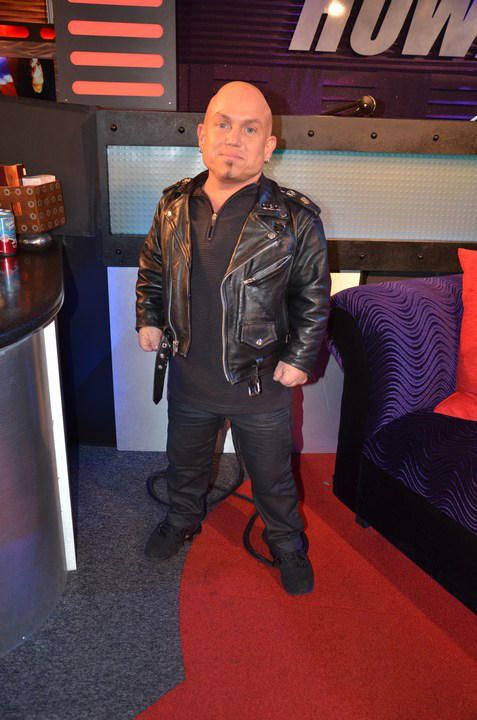 Marty Klebba returned to catch up with Howard and promote his latest film, “Project X.” But first he explained that he had dropped his old moniker, Marty The Midget, because he felt, like Eric The Actor, that the M-word was the equivalent of the N-word. Marty denied–despite his role in three of the “Pirates of the Caribbean” movies–that he was now a millionaire: “I got paid, for each movie, a certain amount and then you get residuals…but then they start to fall off.” So he tries to make the most of each gig: “It’s always in my contract: I do all my own stunts…there isn’t another little guy built like me.” In “Project X,” said clause had him stuffed into an oven and driving a Mercedes into a pool: “It’s like the best high school party you’ve ever seen.”

Asked about his ex, Marty remembered the 3’6″ woman fondly: “She was the most hottest little person I’d ever seen.” But sex with her, despite their proportional compatibility, was unusual: “It’s still weird when you’re with a little person. You know, usually, when a girls knees are at your shoulders, it’s her toes.” Now he’s got a normal-sized wife, 26 year old Michelle, who stands at 5’8″: “I could just watch her sleep, and [be] like, ‘How lucky am I?'” Marty said he met Michelle through her college roommate, a little person, and would do anything to please her: “I’ll hang from my toes as long as I’m making her happy.” Howard looked at a picture of Michelle and marveled that, while beautiful, she didn’t seem much taller: “You can handle her, huh? How come she’s the same size as you?” Marty laughed: “She’s sitting down.”

Can Marty Save JD?

Since Marty’s been successful in life and love, Howard introduced him to JD and pressed for advice. Marty thought JD should start at the top: “Wash that hair…[and] dude, you gotta walk in with confidence.” JD said confidence was hard to build in this environment: “I don’t know, maybe because of shit like this? I get insulted every time I walk in–I walk in to a room.” As JD stormed out, Marty also pointed at his gut: “You’re not going to be here when you’re 40 if you keep eating like that.” Robin thought JD was a lost cause: “He seems to be upset about everything we say in this regard.”

The Old Times at Scores

Howard remembered some of the epic nights he and Marty shared at Scores: “You were [always] the first guy down to his underpants.” Marty said they were good times (“We had three chicks each! Those were the days, man.”) and clearly wished they could go back: “We’re not throwing any bologna on any chicks’ butts today?”