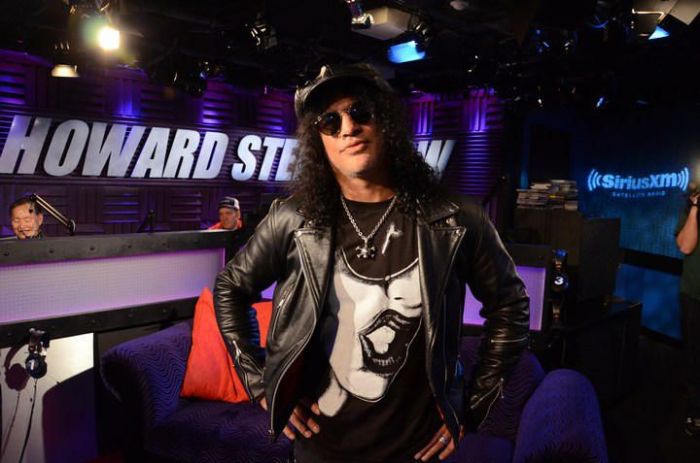 Slash stopped by to promote his new album, ‘Apocalyptic Love,’ and denied that his top hat was an affectation: “It wasn’t intentional, so I didn’t see it coming. But eventually it did–it became a signature sort of thing.” He explained how he had actually stolen it from a store called Retail Slut on Melrose: “[It was] just tall enough to be tall and just short enough to not be knocked off by a gust of wind. … I guess I was just cruising around looking for stuff to pilfer.”

Asked about the Guns ‘N Roses legacy, Slash said it was no longer in his hands: “We gave up the name and all that kind of stuff because no one really gave a shit.” Asked why Axl hated him so much, Slash admitted (“I’m not that fond of him either.”) he’d done some damage himself, citing a few things he’d said during Velvet Revolver’s first press tour: “I’m sure that had some stuff to do with it but I don’t dwell on that stuff.” Slash said it was too bad, as GNR had a rare chemistry: “As a songwriting team, we really did it together. From a musical point of view, I can’t–I don’t want to speak on a lyrical point of view, but from a musical point of view, they almost wrote themselves. A song would take–maybe–some hours to finish. From top to bottom.”

Slash said he and the rest of the guys in Velvet Revolver enlisted Scott Weiland with open eyes: “We knew going into it what we were getting into but we just wanted to play.” Finding a singer had proved to be grueling: “We were listening to 200 singers a week for about 10 months. It was miserable.” It wasn’t just Weiland who was affected though, the band wasn’t good for anyone involved: “There was a period there where we all fell off the wagon. In 2005.” But it was Scott who tested the band’s limits: “There was a lot of uncontrollable diva shit. Just, you know, serious rock star stuff. That’s when your sense of entitlement is to the point of being so inconsiderate to the people around you that you can’t work in a group situation. … I think it’s just extreme narcissism.”

“I don’t dwell in the past. … I’ve heard a lot of numbers being bandied around and, you know, they’re in the multi-million kind of [zone] but it’s just not going to happen. It’s not worth it.”

Slash said he’d had problems with drugs–but alcohol was the worst: “I learned very early on that if you wake up with a hangover, you can just drink it away–and did that for 25 years.” But he’s no rock casualty. He’s managed to avoid bankruptcy: “That all depends on how much you spend. I’m not a big spender but I have a lot of overhead.” And with simple precaution, he never lost his most valuable assets: “I’m not overly paranoid or anything, but I try not to leave my arm out the window when I’m driving.”

Nirvana Was Right About Axl

Before he left, Howard asked Slash how he felt about Nirvana (“They were critical with guys like you.”), but Slash actually thought Kurt and Courtney’s complaints were legitimate: “There were some issues that happened–having to do with Axl–that I felt like they were totally right.”