Actor visits the studio to talk about his new show 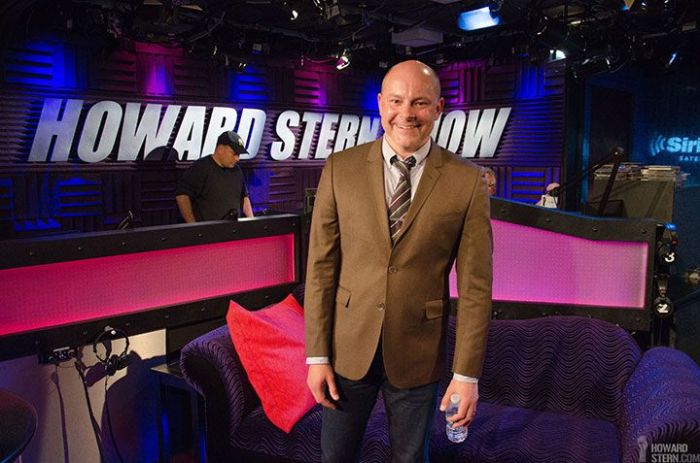 Comedian/actor Rob Corddry is a huge fan of Howard, who is a fan of Rob’s as well, only he didn’t know it. Rob is one of those guys who pops up in movies left and right, and is great in everything, but whose name you never really learn. You know, he’s that bald guy from stuff.

That all changed today, however, as Howard talked to Rob about his life, his Adult Swim show “Children’s Hospital,” and the upcoming movie “Hot Tub Time Machine 2.”

Howard then asked Rob about his recent comments on Celebrity Superfan Roundtable about writer Benjy Bronk, namely that he would never hire him. Rob said he’s sure Benjy is a good writer (Why else would Howard employ him?), but he’s not a fan of Benjy’s persona, especially his lateness.

Benjy immediately went on the attack in response, saying Rob isn’t an “A-list” guest labeling him a “boring” interviewee. That is, until Robin begged Howard to shut Benjy’s microphone off, which he most definitely did.

But the resourceful Benjy would find another microphone on the “rap Up Show,”where his verbal assault of Corddry continued. Benjy maintained that, if you think Howard is funny, you must then think Benjy is funny because Benjy writes many of the jokes that Howard weaves into the show. Stern Show producer Jason Kaplan then barreled into the fray to contradict this, pointing out that there are many people who write material for the show; chief among them Stern Show head writer Fred Norris.

HowardTV: Rob Corddry Is ‘That Guy’

Roger Daltrey Opens Up About ‘The Who’

HowardTV: Roger On That Time He Punched Out Pete