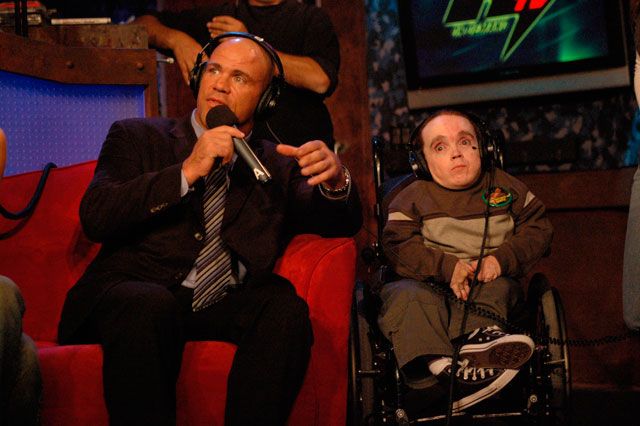 Eric the Midget couldn’t resist calling in this morning to chastise Howard and protest a joke he made about WWE star Darren Young coming out of the closet. The joke was that his parents are embarrassed – not because he’s gay but because he’s in the WWE.

Eric found it very disrespectful and Howard asked when he’ll be allowed to joke about the WWE? Eric said it wasn’t funny and nothing could change his little mind. Howard concluded that this is Eric’s low IQ showing – he clearly doesn’t understand satire.

Howard then played some of Eric’s brand new WWE audition tape – where he deftly displayed his ability to play the part of the most subdued, boring manager in fake wrestling history.

When everybody woke up, Howard asked if Eric would play Darren Young’s manager. Eric says “No-o” because he doesn’t want to play a “heel’s” manager.

We wish Eric would embrace a gay role – he’s shutting out a whole segment of the population who deserve to passionately hate him too.

Howard also played a clip of TNA star Bobby Roode passionately ranting about how much he hates Eric on a recent podcast. Bobby Roode finds rude Eric creepy for loitering outside the locker rooms and wants to kick him down into the ring and then kick him back up to the nosebleeds, which actually sounds fun.

Just after Eric hung up the phone, “Steven Spielberg” called in to offer him the lead role in E.T. 2, but the Midget was gone. Just his luck!