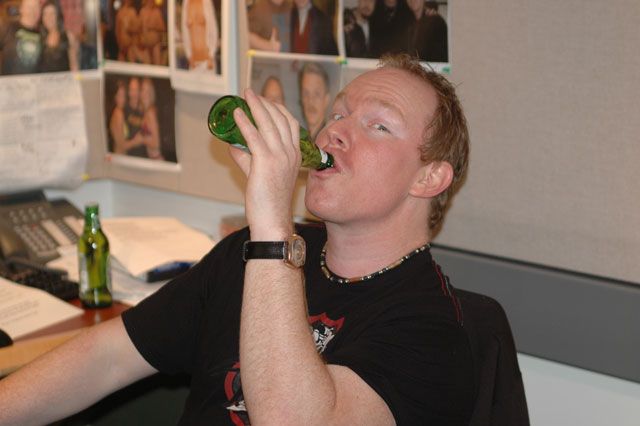 As you probably know, Richard is an enormous Metallica fan and he recently announced that he would do anything to sit in the studio next week when they perform live. However, his Stern Show co-workers came up with the one thing Richard won’t do: stop drinking for one month.

Richard came running into the studio after Howard announced the challenge on the air. “No way!” Richard shouted, explaining he could perhaps go 30 days without drinking during the month of January but wasn’t willing to give it up around Halloween.

But if he stopped drinking for one month starting today he would clear Halloween by a couple weeks. “It’s Halloween now!” Richard argued.

If he did accept this challenge and fail, Howard wanted to know what would Richard’s punishment be? It didn’t take staffer Sal Governale long to come up with something awful. He promised to not shower for a full week and give Richard a mustache made of the “smegma” that collects in his penis pouch.

To everyone’s surprise, Richard announced he’d be willing to accept that punishment.

Toward the end of the show, Richard came in and told Howard he has a lot of drinking stuff planned in the next month and he just can’t give up booze. His love of pumpkin beer outweighs his love of Metallica.

He’ll be getting his “smegma” stache from Sal very soon!