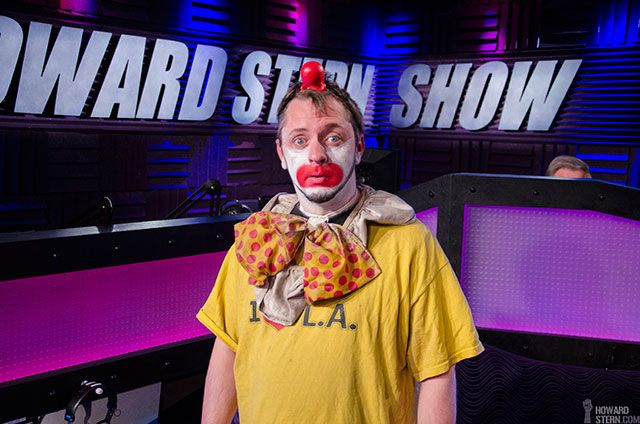 Yucko the Clown, who hasn’t been on in a while, stopped by to officially retire the Yucko character and become plain old Roger.

Now that his Brickleberry cartoon on Comedy Central was doing well, he feels he didn’t need to rely on the make-up and horn any longer.

With Brickleberry, Yucko…sorry, Roger, is making $200,000 a year but his life had gotten pretty rough before his current job. How rough? He was rejected from a job waiting tables at Applebees because he was “too old.”

The Reports of Yucko’s Death Have Been Greatly Exagerrated

Thinking Roger planned on burning his clown suit in the studio Howard got upset when Roger balked at even taking off the clowny make up on air. When Howard pointed out that that’s the reason they booked him, he reluctantly removed the ridiculous get-up.

And out emerged a timid, sad man named Roger who looked a little like Gilbert Gottfried.

SEE ALL THE PICS IN THE YUCKO THE CLOWN GALLERY

Roger answered a few questions about his real life – he’d gotten laid a few times since his divorce, mostly by “fours” and admitted that he isn’t racist; he loves everybody – before Howard demanded he put the costume back on and never come on this show as Roger again.

Roger slipped back on the dirty disgusting Yucko robe to roast the staff. Some of his better lines:

“Robin I heard you had cancer. What was it, watermelanoma?”

Yucko commended Howard on the renovation of the compound, but asked when we were getting rid of the big smelly couch – “Oh, wait, that’s Benjy.”

Speaking of cancer and Benjy, “When are you getting rid of this 300 lb tumor from the studio?”

Yucko announced that Ronnie’s cologne wasn’t Mambo it was embalming fluid and he hoped that his much-younger girlfriend wasn’t a gold-digger. “I hope she’s a grave-digger!”

Even everybody’s favorite man George Takei couldn’t escape Yucko, who theorized that “he reads the North Shore Animal League calendar like a menu.”