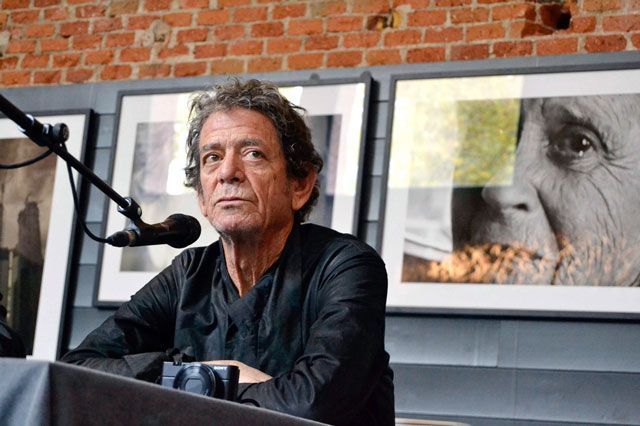 Howard opened the show talking about the death of Lou Reed, a musician that Howard always liked, though he was always unsure how Lou felt about him.

Their first interaction was at a large event in California where many radio shows were broadcasting. Lou was being interviewed by other stations but wouldn’t come over to Howard. This being Howard’s day of rebellion, he got on a bullhorn and started yelling, asking Lou why he was being ignored.

Howard assumed that Lou hated him, until one day when he received a note from the rocker telling him that he himself was being censored by the FCC (for this song “Walk on the Wild Side“) and asking Howard to keep fighting the good fight.

Howard and Beth ran into Lou and his wife Laurie Anderson* on the beach a few years ago and Howard didn’t know how to approach the situation – does Lou love him or hate him? So, he didn’t approach him at all, and consequently, he had no idea what Lou thought of him when he passed away. Howard was sure, though, that Lou was thinking about him.

Howard reflected on the songs of Lou’s that he loves, Heroin, Sweet Jane, even the “Loutallica” collaboration Junior Dad – which seemingly nobody but Howard and former Stern Show producer KC Armstrong liked.

*Incidentally, Laurie Anderson is an artist whom Howard has technically collected. Howard an art collector? Well, in Lake Tahoe he once saw a Plexiglass piece of art that showed a guy with long hair and a microphone, assuming it was himself. After winning $1,000 playing black jack he splurged and bought it. Unfortunately, it turned out to be a self-portrait by Laurie. Howard has since thrown the piece out.