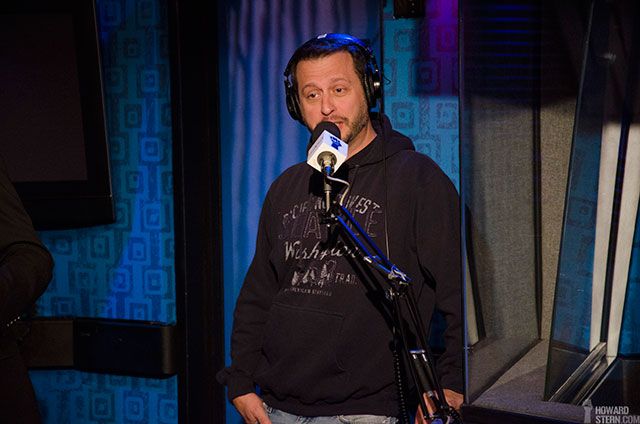 Long ago, we learned what a great rapper Sal Governale is, but today, new recordings were unearthed (posted on Sal’s Twitter) that display Sal’s sweet songbird skills.

Sal decided that, instead of the classic Christmas card, he’d record himself singing Christmas songs for his family and fans. He performed his unique take on “It’s the Most Wonderful Time of the Year” and a stirring rendition of Elvis Presley’s “Blue Christmas.”

To say the least, Howard was blown away. He had no idea that there was such a talented singer on our staff. He also immediately saw dollar signs.

After a quick brainstorming session, he thought the big idea was renting out Radio City Music Hall, Howard’s home as an America’s Got Talent judge, and selling tickets to see Sal perform with a full orchestra.

Sal was thrilled. He promised that he could learn eight to ten songs on his own, provided an orchestra record the track with a different singer. He’d even set up a more intimate show at some place like the Knitting Room (good luck finding that Sal. When you can’t, you should check out the Knitting Factory).

Howard was amazed. Sal was better than Michael Buble. Sal offered Buble some advice, saying his problem is he doesn’t have his own style, it’s a rip-off. When Sal does his best Elvis impression on “Blue Christmas,” it’s homage.

Howard gushed that Sal was as good as Michael Bolton. Bolstered, Sal one-upped him: “I’d say a little bit better.”

Robin and Fred agreed that Sal’s talent was not to be believed. King of All Blacks called up and said that surely this was a bit, that could not have been Sal on those recordings. Sal promised that it was.

Beaming, Sal bounced out of the studio, I insisting on leaving on a high note. “This isn’t Britney Spears, mother*cker! This is Sal Governale!”

Howard broke the real news: the songs were actually horrible and Howard was busting Sal’s balls. Howard couldn’t resist. Gary had gone into Sal and Richard’s studio, turned off their radio for a quick meeting about the Birthday Bash while Howard announced his intentions to Robin and the audience.

Sal was deflated. He was wondering why he posted the songs on Facebook and they only got four “likes.” Next time Sal feels like recording a song, Howard advised, “make a phony phone call.”

Eli v Psych aka The Feud of the Century