The great Ben Stiller – actor, writer, director – stopped by today to talk about making his latest movie The Secret Life of Walter Mitty, and the other movies he’s made behind and in front of the camera.

* When Ben was a kid, his mother – Anne Meara of the legendary comedy team Stiller and Meara – called up the playwright John Guare and asked that Ben be allowed to audition for a revival of his play the House of Blue Leaves. Ben auditioned and was cast. Steven Spielberg saw him in the play and liked him so much that he cast him in his new movie Empire of the Sun.

* Howard wanted to know if it was difficult growing up with parents as famous as Jerry Stiller and Anne Mira. They were a comedy team in the 50s and 60s, travelling all over the world performing together. Ben admitted that he was resentful, but he’s gotten over it. He makes sure that he spends a lot of time with his kids, and hopes they won’t resent him.

* During Empire of the Sun, Spielberg let Ben observe him and his process for the entire shoot, answering any questions he had, even stuff about Jaws and E.T.

* Ben would go on to write for Saturday Night Live, but he quit when his sketches weren’t making it to air. He had visions of writing short pre-recorded bits for them like Albert Brooks did at the beginning of SNL, but that dream wasn’t working out.

* Ben went on to direct and star in Reality Bites and direct Cable Guy, which was the first Jim Carrey movie that didn’t do well at the box office (even though it’s a great movie!). But Ben pressed on.

* He was cast in the Farrelly Brothers’ monster hit There’s Something About Mary, which really birthed Ben Stiller the Comedy Star. The movie was a sleeper hit, growing and growing as opposed to most movies where their biggest weekend is opening weekend. Howard pointed out that this was also the case with the cinematic classic Crocodile Dundee.

* Ben claimed that his biggest regret was turning down the opportunity to direct Good Will Hunting, which became a huge hit. He didn’t like that these two unknown guys (Ben Affleck and Matt Damon), who wrote it were also attached to star in it, so, like many other directors, he passed. 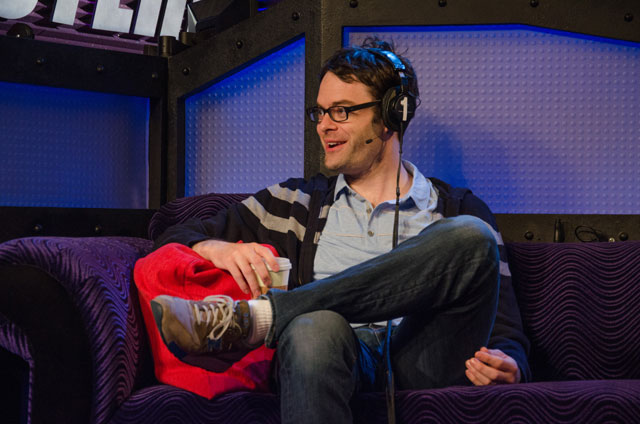 ZOOLANDER, TROPIC THUNDER AND BEYOND

Soon after Ben wrote, directed, produced and starred in the cult hit Zoolander. People grew to love this movie more and more even after it was out of the theaters. Howard said his daughters love it and they weren’t even old enough to see it when it came out. Ben saw the movie at a screening at Lincoln Center recently and was pleasantly surprised that it still hold up and the audience is still laughing.

A Zoolander sequel is in the works. He and Justin Theroux have written a script, they’re just waiting until everything lines up over at Paramount.

Ben and Justin have been friends for years, and Ben was amused at the shift in public attention once Justin started dating Jennifer Aniston. The photographers used to ask Ben who Justin was, now they ask Justin who Ben is.

Howard asked if there’s any truth to the tabloid story that Ben’s wife Christine Taylor and Jen don’t like each other. Ben said not only is it not true, he hadn’t even heard the story.

Ben and Justin Theroux wrote Tropic Thunder together (Justin came up with the “never go full retard” line that Howard loved so much) and Ben loved making the movie. It was an idea he had had since Empire of the Sun.

He became close to Robert Downey Jr., who played an actor playing a black man. Ben and Robert are now kicking around the idea of a live action version of Pinnocchio where Robert plays Geppetto.

THE SECRET LIFE OF WALTER MITTY

As for his new movie, The Secret Life of Walter Mitty, Ben spent about two and half years working on it. It was a pet project of John Goldwyn’s that was kicked around to Steven Spielberg and Ron Howard, but never went anywhere. Ben wanted to make it happen.

He cast Kristin Wiig as the female lead and the movie is about a guy who spends his life in Life magazines photo archives – looking at pictures of great events instead of living them. Robin said this reminds her of another great American story: Jeff the Drunk.

Howard theorized that it must be difficult for Ben to direct movies because studios want him free to star in big money-making comedies like Night at the Museum, but Ben had made it work. Hopefully this can be a monster hit, so he can do the movies he wants to do forever and ever.