Mike Tyson is 30 Days Sober and Talking to Howard Stern

Mike Tyson is 30 Days Sober and Talking to Howard Stern 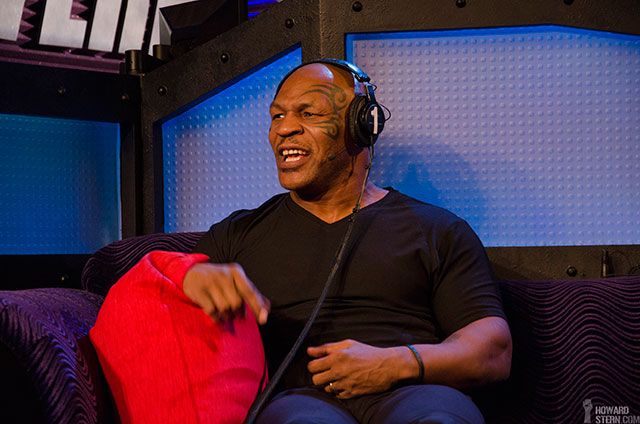 Former heavyweight champion of the world, Iron Mike Tyson stopped by just after arriving on a plane from China – why was he just in China? He couldn’t remember.

Mike has been sober for thirty-three days as of this morning – He admits that he was lying about being sober before. He said there was too much good stuff going on in his life and he couldn’t handle it. He’s now fighting for his sobriety on his own because his wife thinks AA is a cult.

Here are some highlights from Tyson’s interview:

* The big recent boxing news was that Floyd Mayweather was paid $40 million to fight Saul “Canelo” Alvarez a few days ago. Mayweather won the fight, because, as Tyson puts it “He’s a master fighter.”

Regarding Mayweather walking in with Justin Bieber, Tyson conceded that boxing may not be as scary as it was when he was fighting, but as good as he is, Mayweather can walk in with anyone.

* Mike’s ex-wife Robin Givens got into an accident in their $200,000 Bentley (according to Mike she crashed it on purpose after she found condoms and thought he was cheating on her) and Mike gave the cop the Bentley instead of making his wife deal with the legal process.

* Mike played the videogame “Call of Duty” with his kids and Justin Bieber once when the pop star came over to his house. When asked if Tyson made any money off his own videogame – Mike Tyson’s Punch Out!! He didn’t make much, he accepted a flat fee and, according to Mike “it broke all the records in history.”

* Mike says he doesn’t have hard-feelings toward Teddy Atlas, the guy who fired a gun at a fifteen-year-old Mike for grabbing his sister-in-law’s butt. He’s too old for that now.

* Mike has started promoting some up-and-coming boxers. He’s trying to be honest, and not screw anybody over like boxing promoters – in his case, Don King – did to him.

* Mike revealed that when he was a fighter, he had a lot of bitterness for being short. He’s 5’10”, which isn’t really that short. Howard said he’s 6’5″ and wishes he could take a few inches and give them to Mike.

* Mike admitted that he isn’t a fighter anymore, he shies away from confrontation – with the notable exception of a woman who owed him $15,000 recently. Mike really needed the money and he had to get a little crazy just to show her that he meant business. She paid him.

As for where he’s heading, Mike said “I’ll be f*cked up for the rest of my life, but I’ll always be trying to be right.”

Mel B is Fired Up