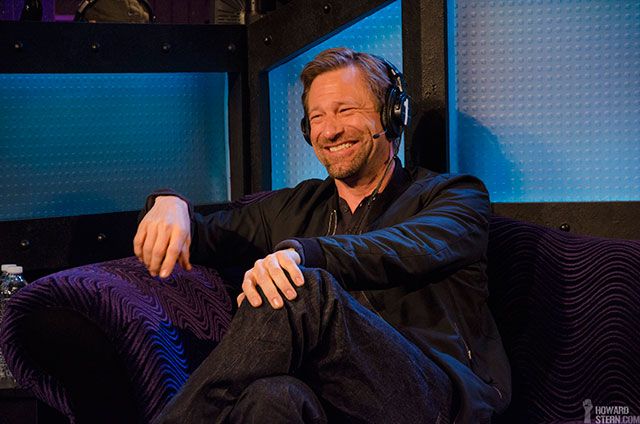 Aaron Eckhart, actor and world’s first handsome Frankenstein stopped by this morning to talk about his movies, his process, and life as a reclusive leading man. Aaron didn’t hold anything back, so let’s dive right in!

Aaron and Howard are seemingly the only two movie stars who admit to getting aroused during sex scenes. Howard didn’t even really have any sex scenes in Private Parts, but he was boned up for most of the movie anyway.

Aaron admits that it’s your job as an actor in a love scene to be aroused and to be arousing. Sometimes, though, sex scenes can be a turn off. Aaron spoke of the long, long hours shooting and sweating and getting dirty. One partner who didn’t turn him off was Julia Roberts, who made out with Aaron in ‘Erin Brockovich’.

Even with the full erections, he’s never had an on-set romance. If it gets intense, he and his co-star can make a rule that says between ‘Action!’ and ‘Cut!’ there are no limits, but after ‘Cut’, you stop.

Aaron is a pretty strict method actor, not wanting to break character between takes, and going to great lengths to prepare for a role. He even went so far as to attend a support group for parents who had recently lost children to prepare for his part in the film ‘Rabbit Hole.’ He went in character and told the story of how his son was hit by a car as if it were real life.

Howard and Robin were astonished (as was Jonah Hill, who came in right after Aaron, and said: ‘That’s pretty heavy’). Aaron admitted that it was rude, but he felt he needed to get as close to the reality of the situation as possible.

Did his movie wife Nicole Kidman join him? No, she was “in the Bahamas or somewhere.”

Aaron also spent a lot of time in a wheelchair for his upcoming movie ‘Incarnate.’ Not only did he spend all day on-set in the chair (allowing nobody to help him if he got stuck or fell) but he also took to the streets to really live the role he was playing.

He really creeped one woman out as she tried to get in her front door, asking “is this your house?” It was, and she desperately wanted to go inside, and away from Aaron, but then something changed. Humanity took over and she turned and asked if he was having a good day. He probably was, spinning through the streets and yelling at cars.

Aaron admitted that his process could be pain in the ass, and not all great actors are method. Jack Nicholson, who Aaron worked with in the Sean Penn-directed film ‘The Pledge‘ is pretty low-key in his approach. During one scene, Jack finds a tooth in Benicio Del Toro’s body and holds it up, looking at it intensely. Aaron had to know what was going through Jack’s mind as he studied that tooth.

“I was counting to ten,” the icon revealed.

THE JOKER AND TWO FACE

Of course, Howard had to ask about playing Harvey Dent/Two Face in ‘The Dark Knight’.

He worked with Heath Ledger in his legendary performance as The Joker and Heath was as obsessed with his character as Aaron. Heath would mutter to himself and smack the wall all day on set. They’d even get into position an hour before shooting started and just interact as their characters with Heath messing around and exhibiting the Joker’s ticks and compulsions.

When Harvey finally becomes Two Face, Aaron only had some blood and make-up on his face, not the horror show we saw in the actual movie – which was done in post. He felt he could’ve perhaps done an even better job if he really had that make-up on, and the cast could really react to a man with half a face. Thankfully, he didn’t do anything drastic.

When he isn’t becoming a character, he’s a pretty non-Hollywood type. After he’s done promoting his latest movie, I, Frankenstein, he’ll ‘disappear’ and drive his truck somewhere. He hasn’t seen one of his movies since the very beginning. He’s got a place in Montana and stays in shape by climbing trees and throwing rocks.

And as for the ladies – Aaron was cagey about details. At forty-five, he’s not looking to settle down or have children. In fact, he thinks he might be sterile. This led Howard to ask if he has been forgoing a condom and finishing inside women for all these years. Aaron didn’t confirm or deny it, joking that he ‘abstains completely.’