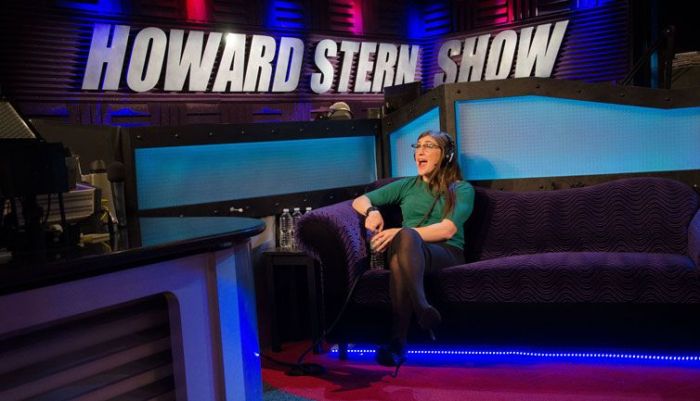 Blossom and Big Bang Theory star Mayim Bialik stopped by this morning to promote her new book Mayim’s Vegan Table. She talked to Howard about her accidental child-stardom, the role Judaism plays in her life, and, of course, her unique views on parenting.

Here are the highlights from Mayim’s interview:

* Mayim was interested in performing arts as a child, but wouldn’t call herself a ‘hammy’ kid. She did a few school plays and auditioned to play the child version of Bette Midler’s character in Beaches. She got the role, though her singing was sub-par and dubbed by another, better child singer at Bette’s request.

* The Beaches role led to Mayim shooting into the pop-culture stratosphere when she landed the role of Blossom Russo on the hit 90s sitcom ‘Blossom’. Mayim said the pay scale was different back then and she wasn’t making nearly the kind of money that can be made in TV today. Ted Danson had just broken the $100,000 per episode mark and everyone was in awe of a sitcom star making that much money.

Luckily, Mayim’s family was a responsible one, and aside from upgrading to a nicer home with heat, they put most of it away for Mayim.

* When the sitcom ended, Mayim walked ‘right off [the] TV screen and into the quad’ of UCLA. She had been accepted to Harvard and Yale, but had to defer because her contract and Blossom wasn’t up for another two years. Harvard and Yale were not accommodating, so Mayim chose UCLA.

She basically took fourteen years off for show business. She met her husband at UCLA, got married, had two children, and, yes, got divorced. Mayim and her ex-husband seem to have a pretty decent relationship, and they co-parent their two sons.

Freaking out over my experience with @HowardStern at @sternshow. Highlight of my career hands down! Swoon!!!!!!

THE MYSTERIES OF ATTATCHMENT PARENTING

If Mayim is ever in the news, which isn’t often because she’s pretty private, it’s for her practice of ‘attachment parenting.’ She slept near her kids during their early years, pointing out that all mammals sleep near their young. She breastfed her sons until they were four years old.

Perhaps the most fascinating part of her technique was not using diapers on her kids. Mayim claims that babies can immediately let you know that they need to go to bathroom; you just have to teach yourself to interpret it. Just in case, she kept a pot by the bed. (she must have never spent much time with Beetlejuice).

Her kids keep a vegan diet, don’t watch TV (except select programs when they’re at their dad’s house) and are totally home-schooled.

Mayim admitted that the single thing she’s most criticized for is not vaccinating her kids in their early years. She is not anti-vaccinations and her kids have been given some vaccines, but not when they were infants.

Beginning in college, Mayim’s Judaism became more and more important to her. She considers herself a Modern Orthodox, who follows most of the customs and traditions of her culture. Throughout her marriage, she even made use of a Jewish bath called a mikveh to separate the time of the month when she could conceive and when she couldn’t.

Since her divorce in 2012, Mayim has not really dated anyone. Howard asked how she takes care of her physical needs, but Mayim declined to map it out. Robin asked if there was a ‘special drawer’ in her bedroom and Mayim joked ‘I have a whole special safe room.’

Mayim’s mother was very disappointed when Mayim got divorced, but she seems to take her mother’s prodding with a healthy grain of salt. After the Golden Globes, her mom called her up and said ‘you looked like you, but gorgeous!’

Mayim is careful about what parts of her body she shows to the public, calling herself an ‘unadorned feminist’. She also doesn’t shave any part of her body, but thankfully isn’t very hairy. She also publicly questioned why comedienne and Stern Show regular Sarah Silverman had to dress in a sexy, provocative way. Mayim felt it was a push by society that made Sarah feel like she needed short skirts and cleavage. We’re not complaining.

FROM A DOCTORATE TO THE BIG BANG

Although she earned her PhD in Neuroscience, she decided to return to TV because being a research professor would not allow her much time with her kids during their formative years. And if the breastfeeding, shitting, and home-schooling didn’t spell it out for you, Mayim is a very hands-on mother.

She did a few small roles on shows like ‘Bones’ before auditioning for the most popular comedy on TV, The Big Bang Theory. Mayim doesn’t watch TV, and had never seen the show before auditioning for it. The audience was initially resistant to the beloved character Sheldon getting a girlfriend, they have embraced Mayim’s character Dr. Amy Farrah Fowler.

Check out Mayim’s vegan cookbook (everyone is doing it) ‘Mayim’s Vegan Table.’