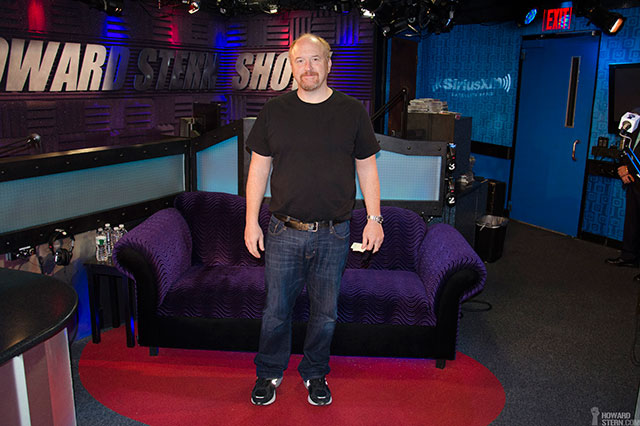 Louis CK stopped by this morning to promote the fourth season of his enormous hit sitcom Louie on FX. Louis was looking thinner and healthier, but thankfully, he was still as funny as ever.

THE WILD ADVENTURES OF LOUIE’S PENIS

The story that most fascinated Howard was something he heard about Louis letting his dog lick cottage cheese off his balls. Louis didn’t deny it, but clarified that he was probably a kid and it was probably his penis.

‘I got up to all kinds of shit with my penis,’ Louis said.

He waxed poetic about heating chicken cutlets in the microwave to make a vagina facsimile and closing his penis (gently, we hope) in the refrigerator door. Louis and Howard and Robin then totally lost it laughing.

Howard admitted that the story reminded him of stuff he used to say earlier in his career and how it embarrasses him today, but Louis seemed to have made peace with it. You have to accept the lowest form of yourself, according to Louis.

“The person you really are is the worst version of yourself,” Louie explained.

Speaking of Louie’s penis, Comedian Ricky Gervais appeared on an episode of Louie and claimed that he saw Louis penis and labelled it ‘disgusting’. ‘

He was hot and clammy and I had to go up there…and I could smell everything… Sweat and shame… (He has skin) like an undercooked chicken. Ricky said.

Louis called the claim that Gervais saw his penis a lie, but admitted that everything else was probably totally true.

Holy cow!! The Louis CK interview on Howard Stern has me howling. I have tears rolling down my cheeks. @HowardStern @sternshow

WHY WOULD A WOMAN EVER DATE A MAN?

Louis recently came up with a bit while he was in the middle of performing his stand-up act. He had the thought: Why would a woman date a man?

‘There is no greater threat to women than men’ Louis said. It’s insane. Men rape, beat and kill women all the time.

Meanwhile, Louis is dating a woman. ‘I’m a lucky guy,’ he said. ‘We’re happy and we fit well together.’

The world should stop what it’s doing and listen to @HowardStern & @louisck right now. @sternshow

Louis also thinks we’re over-using certain words, which robs them of any real meaning. Case in point, the word ‘amazing’. ‘You use [amazing] for a basket of chicken wings and then what do you do when Jesus Christ comes back?’

‘Epic’ is another one that’s used all the time. Louis pointed out that epic just means ‘long’. ‘Awesome’ also means fearful.

Laughing my ass off listening to @sternshow interviewing @louisck about his dog & cottage cheese!

* Louis cried after his audition for Woody Allen’s ‘Blue Jasmine’, but not because it hadn’t gone well. He was just bowled over with emotion because he got to meet one of his idols, Woody Allen.

* Howard asked Louis about hitting on Gwyneth Paltrow. Louis fessed up that he did hit on Gwyneth in 1993 at a Conan O’Brien Christmas party. He felt they were vibing and having a funny conversation. So, naturally, Louis asked her to marry him. They did not get married.

* FX allowed Louis to take a 19 month break from filming his sitcom, and he used the time to recharge. He started teaching himself the ways of the sea in his boat. He taught himself how to navigate the treacherous New York waters, and eventually took his kids along for the ride.

* Louis doesn’t smoke pot often, but he liked to dabble in it once a month or so and sit in a 3D IMAX movie. ‘If you don’t [regularly] smoke pot, it’s crazy when you do.’

Check out season four of Louie, which premieres tonight at 10 PM on FX.

This @louisck interview on @sternshow is amazing.