Broadcasting icon Larry King stopped by this morning to talk with Howard Stern at SiriusXM. 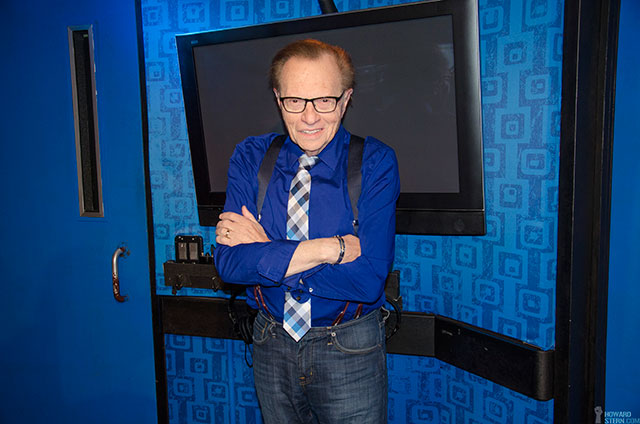 Broadcasting icon Larry King stopped by this morning, amazed once again at the beautiful set-up Howard has at SiriusXM.

Larry sat down and Howard asked him about just some of the famous people Larry has interviewed throughout his fifty-seven years in the business (and he’s interviewed almost everybody).

When Larry was a young local radio host in Miami, his good friend Jackie Gleason had him to a party. Jackie liked to pose questions to his guests and he asked everyone what, in their chosen field, is impossible to accomplish. Larry answered that getting media-shy (and mega famous) Frank Sinatra as a guest would be impossible. Jackie replied: He’ll be on Monday.

Larry promoted the fact that the legend would be his guest for on Monday and, sure enough, a limo pulled up and Frank got out. They sat and talked for three hours and Larry finally asked why on Earth Sinatra chose to do his little show. Frank said he was sick one night and asked Jackie Gleason to perform for his audience because he couldn’t. Gleason entertained the masses and Frank said ‘Jackie, I owe you one.’ Jackie called Frank up when he got to town and said ‘Frank, this is the one.’

Frank invited Larry to his concert later in the week and, with $20 in his pocket and a girl on his arm, he enjoyed the show. He ordered a cherries jubilee, which ended up all over his pants when h Frank asked him to stand up and wave to the crowd.

After spending every last dime he had on tip and carfare, the girl suggested the stop for coffee on the way home. Larry walked into the café, came back out and said ‘they can’t make change of $100.’

Speaking of Gleason, during one memorable appearance on Larry’s show, while discussion psychics and ESP, he took out a pack of cigarettes and slapped it down on the table. He offered $50,000 for anybody who could come down to the studio and make the pack of cigarettes move. Nobody came. 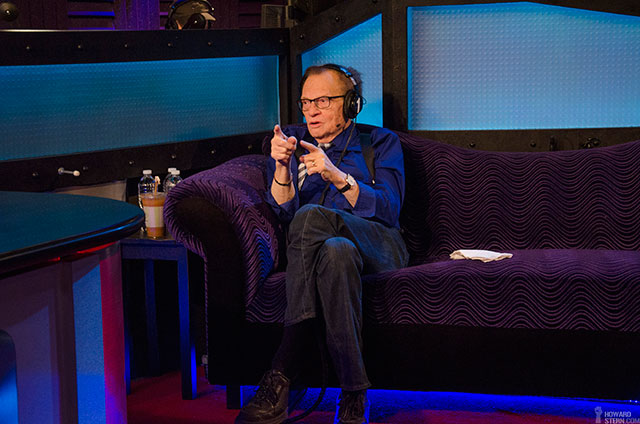 Larry loves interviewing Barbra Streisand, once the interview actually starts. The preparation is not as thrilling. Larry reminisced about a time when Barbra tried on six different dresses, in front of the camera, before deciding which she liked. Then, the lighting wasn’t to her taste. Then, the color of the flowers wasn’t to her taste.

Even when being interviewed at her own home, she still wants total control of every aspect. She called Larry up before he arrived and suggested ‘wear red’, so he would match the curtains.

Larry once interviewed her very, very early in her career, when her now ex-husband Elliott Gould was a bigger star then she was. Toward the end of the interview, Barbra cautioned Larry: ‘You don’t know me, but you’ll know me.’

Off air, Stephen Colbert once told Larry that he lost his virginity in a car while Larry King’s radio show was on. Larry couldn’t believe Howard knew that, but it was true. Larry really has influenced generations of broadcasters.

Larry interviewed Angelina Jolie soon after she and Brad Pitt shacked up. The one thing he didn’t ask her about was breaking up Brad’s marriage to Jennifer Aniston. Larry claimed that people’s bedroom habits are the least interesting thing to him. Howard remains interested in bedroom activities.

Howard has always been fascinated by people like Walt Disney or Ted Williams who have their heads put on ice after they die. Larry King is one of those people. He admitted that he’d like to freeze his head so that he stand a chance of coming back to life if they cure whatever kills him. In 100 years. CNN could theoretically revive him and put him back on the air.

Larry joked ‘and they’ll still be looking for that Malaysian plane.’

Check out Larry’s shows Larry King Now and PolticKing on Ora.tv and Hulu and follow Larry on Twitter, which he basically foreshadowed with his famous USA Today newspaper column.