Comedian, wild child, and professional sassy woman Whitney Cummings stopped by this morning to talk to Howard about the differences between kick-ass, right-on women and stupid men (blech!).

Howard noticed that Whitney was less emaciated than she was the last time she stopped by and Whitney was proud of the way she looked. Howard cautioned that he sees her telling everyone how proud she is about her weight-gain, which makes it seem like she might not be proud.

Whitney shrugged it off – she just dated a black guy! Whitney segued from this into how guys tend to get annoyed with women for doing things that are, ultimately, for the guy’s benefit. Like wearing high heels or dieting. Whitney said ‘I diet so I’ll look like the girls you jerk off to when I fall asleep!’

Whitney broke up with her boyfriend Peter Berg, whom she was dating last time she was on the show, but she’s dipped her toe in the dating pool plenty since. Chelsea Handler even sneakily set her up with a black guy on the set of Dancing with the Stars! Chelsea asked the black guy to please f*ck her friend Whitney and boy did he! 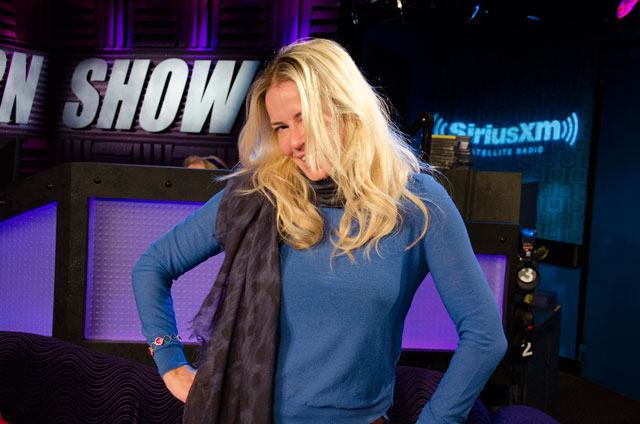 Speaking of Chelsea, Howard asked Whitney about Chelsea’s landmark new deal to bring her talk show to Netflix. Whitney said the best thing for Chelsea is to be happy, that’s when she’s funniest. Plus, she’s taking a year off between her E! show ending and the Netflix show starting up. Howard found that unfathomable.

Whitney is also great friends with singer (and now-legendary Stern Show guest) Sia. Whitney is actually officiating Sia’s upcoming wedding and she promises to make it all about her!

She still talks a lot about sex in her act, and journalists keep referring to her as ‘edgy’. Though Whitney doesn’t understand why sex is still considered edgy. She covers unsightly penises, and pubic hair and where a guy finishes.

Wack packer Hanzi stayed on hold just to ask Whitney one simple question: ‘Yo, Whitney, can I eat your p*ssy?’ Whitney didn’t appreciate him starting with ‘Yo’ but seemed sort of open to the p*ssy eating. In case she wasn’t, Hanzi asked her to put in a good word with Chelsea Handler.

Don’t miss Whitney’s new Comedy Central Special ‘I Love You’ and check out her website for all your Whitney Cummings needs.