Legendary wack packer Bigfoot stopped by this morning to promote his surefire breakout performance in the major motion picture ‘Jersey Shore Massacre’. The movie has some heavy-hitters in it like our own Sal Governale and Richard Christy, as well as a star producer – JWoww from the hit MTV show Jersey Shore, which is no longer on the air.

As Bigfoot started to tell some stories from his wild and crazy life, Howard was reminded of another Hollywood bad boy, Sean Penn. Bigfoot agreed with Howard that there were some real similarities between the two actors.

Here’s what the Sean Penn of low-budget movies has been up to:

Bigfoot had a good thing going with his mail man for a while – the postal worker would pay Bigfoot $50 (or less depending on how much cash he had on him) and in return, Bigfoot would finger the mail carrier in the asshole. ‘He makes sure to take a good crap before he has me do that.’ Then the mail man would strip his uniform off (and the ladies underwear he wore under it) and get ready for action.

Bigfoot has been with men but does not identify as gay. He prefers to ‘go both ways’, which included giving and receiving blow jobs while incarcerated. He doesn’t swallow though, he spits.

In 2012, Bigfoot was arrested for trying to stab cops with a samurai sword. His lawyer got him off somehow, and Bigfoot felt he had a good reason for being so angry – he alleged that his landlord was trying to poison him with liquid insulation. Still, everyone cautioned that it’s never a good idea to try to scare the police. 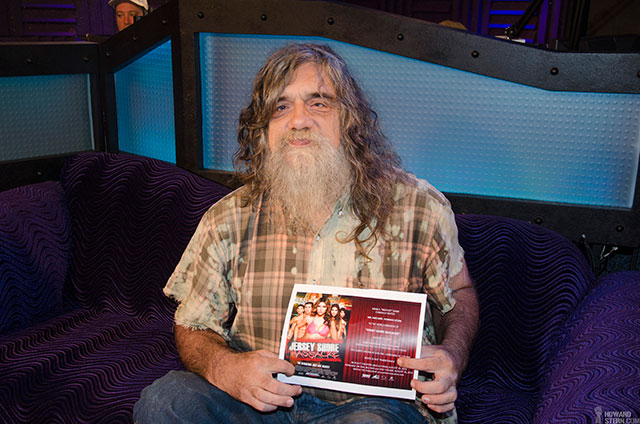 Bigfoot recently shot ‘Jersey Shore Massacre’ and was very easy on set. He made about $1,000 for five days of work, but spent his salary on weed.

After shooting ended, however, Bigfoot started to act like a diva (lunatic). He called and left several voicemails for the film’s producer, demanding that the producer return his call and threatening lawsuits and just generally freaking out.

It turns out that, according to Bigfoot, his whole town was going nuts after finding out that he made $1,000. ‘They throw pennies or rocks and pull their pants down’ Bigfoot said. He felt he was under attack and he took it out on his old boss, threatening to not do a film with him again. Things have apparently settled down a little bit.

Check out Bigfoot and Sal and Richard in ‘Jersey Shore Massacre’.