Ranking high among Howard's personal heroes, the iconic singer/songwriter stops by for an amazing interview 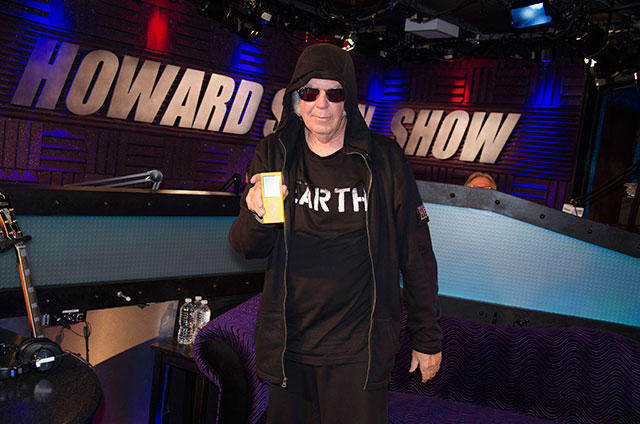 Howard really doesn’t have too many genuine heroes. John Lennon, Paul McCartney, and Bob Grant would number among them, as would today’s incredible guest, Neil Young.

Neil stopped by this morning and opened up to Howard about everything – music, Woodstock, Crosby Stills Nash & Young, songwriting, you name it.

So, imagine you’re sitting with Howard in his childhood bedroom as he spins Neil Young records and gets to ask one of his true heroes everything he’s ever wanted to know.

Here are the highlights from Howard’s interview with Neil Young:

Neil started playing guitar at nine or ten years old – well, actually the instrument he mastered was the ukulele. Little Neil was messing around with it one day and his dad took it from him, tuned it properly, and played a great rendition of ‘Bury Me Out on the Prairie’. Neil was shocked that his dad could sing. Mr. Young finished the song, put the ukulele down, and never sang for Neil again.

He started to write songs at thirteen and the first song Neil wrote was called ‘No’. He learned early on that he had to capture the ideas as they came to him. To this day, he’ll stop whatever he’s doing to honor a melody if it pops into his head. He never really walked around with a recorder or anything, so he’d have to repeat it over and over, making sure it stuck in his head. 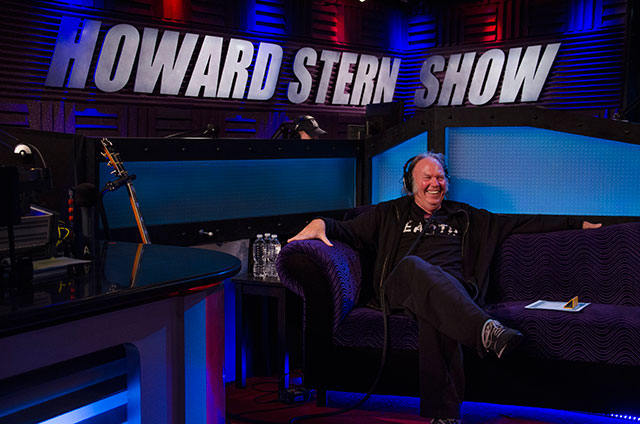 Neil flunked out of high school and his principal warned him that the ‘music thing’ wouldn’t last long.

Neil was in an early band called The Mynah Birds, which featured lead singer Rick James. Yes, that Rick James. ‘Ricky was just a kid’, Neil says of working with the future funk icon.

Neil and Bruce Palmer would later found Buffalo Springfield. Neil still seemed pissed that Buffalo Springfield was recorded in his opinion, poorly. A producer should inspire a band and there was nobody around to do that for them.

Howard played some of the Buffalo Springfield song ‘Mr. Soul’, which Neil wrote in about five minutes. Howard couldn’t imagine writing a song so quickly, but Neil countered that Howard writes a song every time he goes off on one of his conversations with Robin.

Howard played Neil’s first big hit, ‘Sugar Mountain’. Neil listened to it and showed Howard how you could actually hear the room it was recorded in, which was a coffee shop with people in it. ‘Sugar Mountain’ inspired Joni Mitchell to write ‘The Circle Game’.

Next, Neil joined Stephen Stills (who was in Buffalo Springfield) in his next band, Crosby, Stills, Nash & Young. Neil said that, contrary to popular opinion, he never had a conversation with Graham Nash where Graham said he wanted Neil as more of a bit player in the band. However, Neil did insist that his name be part of the band name if he was a member.

When CSNY performed at the legendary Woodstock Festival, Neil famously was hostile toward the cameramen and, subsequently, doesn’t appear in the famous Woodstock movie. ‘I didn’t like the f*cking cameras,’ Neil said. ‘They didn’t have to be on the stage. Use your zoom dickhead.’ Howard tried to praise Woodstock as one of the great moments in music history and talk to Neil about how cool it was that he got to be part of it. ‘Who gives a shit?’ Neil replied. 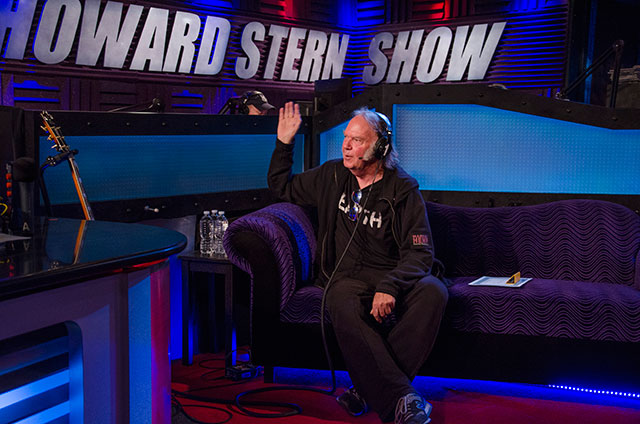 Neil and David Crosby have feuded famously for years. Neil assured everyone that a CNSY reunion tour will never ever happen, but he does wish David Crosby well in his life. Neil, who is something of a contradiction, said there is love there for David, but there is also nothing there for David.

What exactly is going on with David Crosby, Howard asked. ‘Playing with Stills and Nash in that band was really great’ Neil replied. He left it at that.

Neil did get into cocaine for awhile, even feeling like he was better creatively while he was taking it. Eventually though: ‘I got tired of waking up that way and hurting myself and I was getting older.’

Howard also played Neil’s ‘Southern Man’, which is still hauntingly beautiful song. He asked Neil about the feud between himself and Lynyrd Skynyrd (They name-check Neil in ‘Sweet Home Alabama’ saying ‘a Southern Man don’t need [Neil] around anyhow) and Neil said it was all in good fun. They were an amazing Southern rock band and it was a disaster when they died in that plane crash. They even asked Neil for one of his songs to cover and they sent him ‘Powderfinger’.

Neil is a passionate, passionate man, so when he does something, you know it’s done right. Which is why you should check out his new, revolutionary Pono Music System (which delivers sonic waves of about 80% higher quality than mp3s), his new book ‘Special Delux’, and his brand-new album, ‘Storytone’.