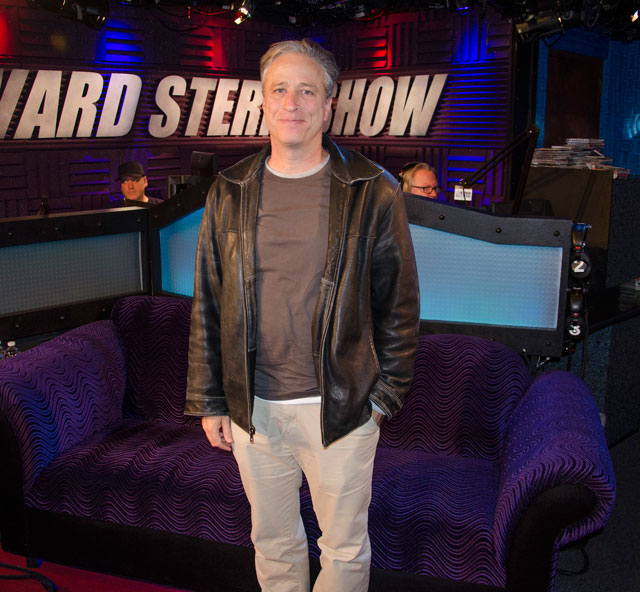 Jon Stewart is famous for many things—”The Daily Show,” hosting the Oscars, dancing in a naval uniform at the Goo Goo Dolls Dance Party in the Stern Show studio—but now he’s added director and screenwriter to his resume.

Jon stopped by this morning (for the first time since 2006) and talked to Howard about moviemaking, his longtime TV gig, and surrounding himself with great talent.

Here are the highlights from Howard’s interview with Jon Stewart:

Jon has been the host of “The Daily Show” for 15 years and he credits his success with finding a format that fit his personality. He tried fitting into the Letterman/Carson role on other shows but that didn’t work out.

He admitted to being a little burnt out on the show, but audiences still love it. Being a satirical news show can sometimes get Jon into hot water if somebody doesn’t get the joke. The late great Steve Jobs once called Jon after they ran a bit called App Holes where Apple sends its own police force to crack down on leaked iPhone prototypes. He wasn’t amused by the piece.

Jon also gets into it with Bill O’Reilly quite frequently, but he admires him as a broadcaster. In fact, Jon admires all of Fox News for creating very compelling TV (with some very hot women).

Anthony Weiner is another constant adversary of Jon’s, but they’re actually good friends – they just constantly argue about everything. Weiner remains the one and only politician Jon has ever donated money to.

When Jon left to make his first movie, “Rosewater,” John Oliver stepped in and hosted “The Daily Show” for the entire summer of 2013. As you know, John went on to start his own HBO show “Last Week Tonight” and John is only one of many “Daily Show” cast members to go on to great success—Steve Carell, Stephen Colbert, and Rob Corddry all first gained attention on Jon’s show. Unlike Oprah Winfrey (who spawned Dr. Phil, Rachael Ray, and Dr. Oz), Jon didn’t try to lock them down under his umbrella, instead letting them fly free.

However, Jon did admit to being jealous of “Last Week Tonight’s” one-show-per-week schedule.

While John Oliver held down the “Daily Show” fort, Stewart took off to Jordan to film “Rosewater”—the movie he adapted from Maziar Bahari’s memoir about being jailed in Iran for a satirical interview he gave about the Iranian presidential election. Jon wrote the script and gave it some of his show business contacts (like legendary director Ron Howard) just to get their opinion on the viability of the project. It was slow to get together, so eventually Jon realized that he would have to direct it himself if it was ever going to get done.

He surrounded himself with a crew he trusted and told them not to assume he knew how to do anything, because this was his very first time out.

Howard asked Jon if he would ever host the Oscars again (he’s done it twice). Jon said he would, but he doubted the Academy was looking to have him back. He theorized that comics like himself and Chris Rock and David Letterman are too cold for the gig. As a viewer, even he wants someone warm to do the hosting.

But who knows? Maybe Jon will be an Oscar winner next year.

Check out audio from Jon Stewart’s Stern Show visit (below).