The legendary sports broadcaster sits down with Howard in studio. 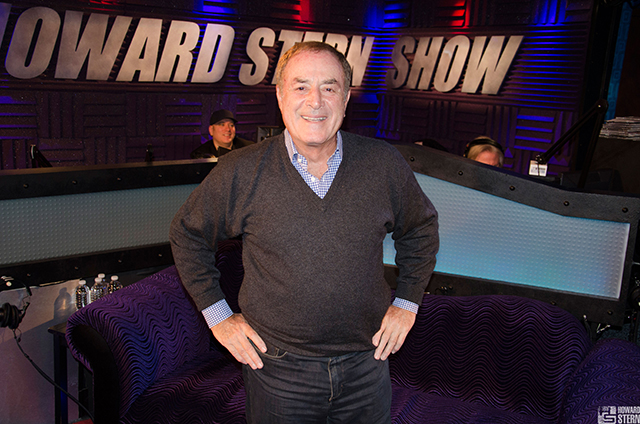 Al Michaels is not only a huge figure in sports broadcasting, he’s a huge figure in the history of our show – thanks to his infamous appearance in the greatest phony phone call of all time – I See OJ.

Al famously cut in on Peter Jennings to let him know – lest anyone think it was real – the call was ‘farcical’ and Maury from Brooklyn did not, in fact, have eyes on OJ.

His love of sports started early, when his dad took him to Ebbets Field in Brooklyn and he never wanted to leave. He quickly learned to turn his passion for sports into a paying gig when he created his own tout sheets for the horse races and began selling them. He was looked upon as a genius after betting on a horse with 75 to 1 odds. Unfortunately, it was a fluke and the DIY business only lasted a week.

He went to college for broadcasting and ascended to the highest level of sports broadcasting. Before he became a sports icon, Al worked for the famous mad genius Chuck Barris on the Dating Game. He’d cold-call people to try to get contestants for the game.

He moved on to work with greats like Pete Rose – who was, wait for it, very into gambling and who, Al said, is in the Hall of Fame as far as Al Michaels is concerned.

He worked with the legendary Howard Cosell, which he admitted was tough during Cosell’s final years as a broadcaster. Cosell was sort of tired of the game at that point, but Al and the other guys were excited to be there. He did get to see Cosell without his toupee on once and it freaked him out so thoroughly that he almost called security.

When he appeared in the movie ‘BASEketball’ he hit the ceiling when he found out that Bob Costas was making $50,000 for his appearance while he was only getting $15,000 (negotiated up from 10K). Eventually, they needed Al to do extra re-shoots so badly, that they gave him $60,000 just so they could finish the movie.

Howard wanted to know why the owners of the Washington Redskins wouldn’t change the name of their team and Al felt that the team has a lot of fans and they have a tradition. Al said the Redskins was the team name for fifty years and nobody complained – you can’t change everything that offends everybody.

Al also has a controversial stance on the growing number of medical issues with retired football players. He said that professional NFL players are paid a lot of money and they choose to play the game.

Also detailed in the book was Al’s visits to see his then-friend OJ Simpson in jail. He pointed out how odd it was that OJ never went on about his innocence, he was just upset with how the media was portraying him and the crime.

As for right now, Al says the Green Bay Packers are the team to beat (but that could change next week).

What won’t change is that Al’s new memoir ‘You Can’t Make This Up’ is very good.