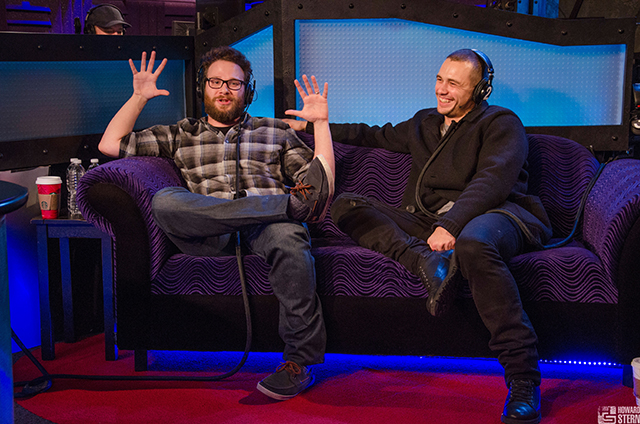 Both Seth Rogen and James Franco have been frequent (and great) Stern Show guests in recent years, but until Monday they’d never visited the studio at the same time.

The modern day Abbott and Costello sat down with Howard to promote their latest and perhaps most controversial film, “The Interview,” a fictional sendup about the assassination of North Korean dictator Kim Jong-un.

Both Howard and Gary Dell’Abate had already seen the movie and loved it. Howard was anxious to talk to the boys about the insane controversy swirling around their comedy.

Seth co-wrote the script for the movie, which centers around a celebrity interviewer (played by Franco) who just so happens to capture the interest of North Korea’s ruler. Un wants Franco to fly to North Korea to interview him, but the C.I.A. has other ideas — they want James to assassinate the dictator.

The actual country of North Korea was not thrilled with the film. They called it “an act of war” and allegedly retaliated by hacking into Sony’s servers which resulted in the leaking of sensitive emails and other media.

Both Seth and James seemed to take the hacks and surrounding controversy in stride, even laughing at the ridiculousness of a comedy film causing an international incident.

Seth agreed with Howard that the leak of private emails was an insane invasion of privacy. Part of the leak detailed both Seth and James’ salaries for “The Interview” — Seth made $8.4 million while James made $6.5 million. Seth confirmed those numbers were accurate and credited his producer-director-writer role with netting him the extra money. 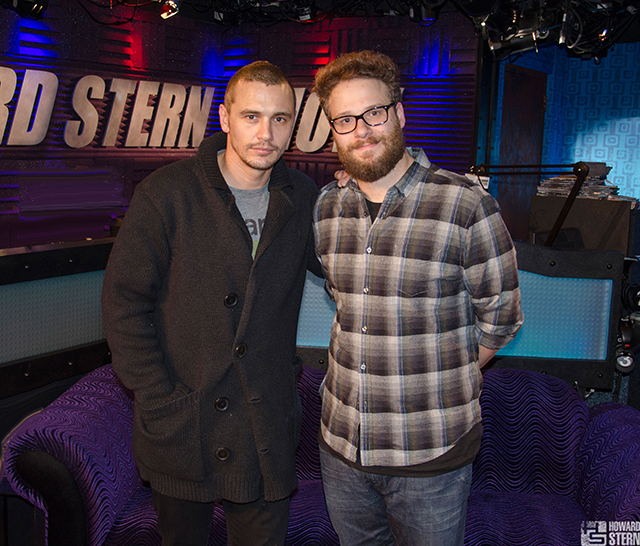 Finally, Howard heard a story about rapper Kanye West performing his new album for Seth in his car and it turned out to be completely true. Seth was planning on eating a quiet dessert with his wife when Kanye approached him in his hotel lobby. Seth and James had just made their legendary “Bound 3” parody video (which lampoons the Kanye and Kim Kardashian West original), so he was nervous Kanye would be offended. Kanye surprisingly wasn’t upset. He even invited Seth and his wife to step into his limo to hear his new music.

When the beats started playing, Kanye started rapping. It sounded like he got through at least a big chunk of his still-unreleased album. Howard asked what one does when they’re alone in a car with Kanye and he’s rapping.

Don’t miss Seth Rogen and James Franco in “The Interview.”

The Culmination of a Dream: Show’s Moving to 7 A.M.!