Rob Lowe is Too Good Looking

Rob Lowe is Too Good Looking 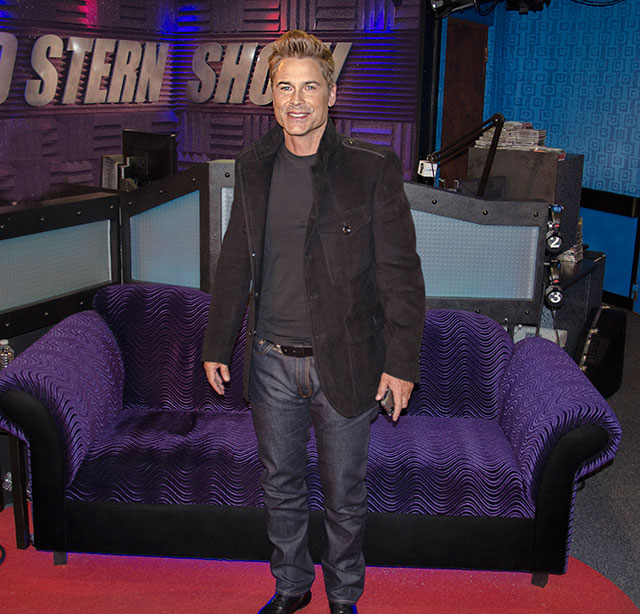 Rob Lowe is incredibly good-looking. When you are past the point of just being a handsome man and reach the level where you can’t outrun the hot screaming chicks who desperately want you – like Rob Lowe – your looks can actually be a burden.

Rob came under ridicule recently for saying good-looking people get discriminated against. The comment seemed sort-of tongue-in-cheek, but he did say that he’s been told that he’s so hot he wouldn’t be believable playing a doctor or a PTA dad. One thing Rob admitted that the one type of role that was still open to someone with his looks was ‘arrogant asshole’.

But real-life Rob is anything but an arrogant asshole, and he sat down with Howard to tell some stories about his life – which has been a good one, despite his looks.

HERE ARE THE HIGHLIGHTS FROM HOWARD’S INTERVIEW WITH HEARTTHROB ROB LOWE:

Rob was the poor kid growing up, but only in relation to his classmates. He went to school with Charlie Sheen,Emelio Esteves, Robert Downey Jr., Sean and Chris Penn, and Holly Robinson Pete, just to name a few. Rob recalled being amazed that Charlie Sheen got a BMW for his sixteenth birthday and that the Sheen family ate real Haagen Daas ice cream.

The Sheens are an eccentric family to say the least. Charlie once showed up to school wearing a bullet proof vest, without offering an explanation. Martin Sheen would also hide in the bushes wearing combat fatigues and scare kids on Halloween.

When Rob was 14, a hot chick invited him to her house for a home-cooked birthday meal. She handed Rob his present and it was a condom. The girl was eighteen and she took fourteen year old Rob’s virginity because she was a sexual predator.

At fifteen years old, he landed a role in the TV show ‘A New Kind of Family‘, a show about two families living in the same house. At a certain point, the network decided to switch one of the families out for a black family, without any explanation to the audience.

Being a child star was more of a rarity in those days, before show business was wall-to-wall teenagers. The network even set Rob up with then-Annie the Musical star Sarah Jessica Parker, because they happened to be two of the few popular children.

CAN I TELL YOU MY FAVORITE MATT DILLON STORY REAL BRIEFLY?

Things looked like they might be drying up for Rob, and he almost walked away to lead a normal life, but fate intervened! He was called to a casting call with, as he put it, every actor in Hollywood under thirty-five. He was up for a part in a movie called The Outsiders and had to audition for Frances Ford Coppola. Tom Cruise, Timothy Hutton, Ralph Macchio, Matt Dillon, everybody was there to audition. Rob remembered Tom Cruise stopping in the middle of the audition and saying ‘this isn’t working for me’. Classic Tom!

Rob admitted that everyone was into Diane Lane, but she wouldn’t give any of them the time of day. Matt Dillon really wanted to ‘close the deal’ on her – so badly that he tried over four moves.

Rob shot to fame and became an international sex symbol. He even went on a date with Madonna back when she was super-hot. They were dancing at the Palladium and she wanted to go out on the floor. Rob was nervous, but Madonna announced that she wasn’t going let fame f*ck up her fun.

Later on, Rob took a role in the West Wing (for less money than he was used to) simply because it was so good. Martin Sheen’s role as the president was originally supposed to be a background role (Rob likened it to the neighbor on Home Improvement, who you only see over the fence). Sheen was so good in it that they expanded his role and gave him a big raise in season two. In fact, they gave everyone a raise except Rob. He left the show after four seasons.

Rob is a big star and had to be rushed out, but Howard had a whole other hour of interview to do with him, so he rushed out a few more stories:

* Rob worked with Jewel in a TV show and she didn’t want to kiss him.

* Rob went to Europe to meet with Roman Polanski about a movie and Roman stacked the room with twenty models. Rob tried talking to a few of them and the director told him, ‘if you don’t make a decision, you’ll be jerking off.’

* And finally, after countless movies, even more women and two memoirs – Rob is a happy, healthy family man.